Fraser Forster's dramatic late penalty save ensured Celtic's away goal gives them a narrow advantage after their Europa League last-32 stalemate in Copenhagen.

Odsonne Edouard earned Neil Lennon's team a deserved lead in the first leg before the hosts launched a second-half surge.

The return is in Glasgow next Thursday.

Edouard's 24th strike of the season was the first away goal Celtic have scored in the knockout stage of a European competition since Henrik Larsson's winner against Boavista in 2003.

Lennon's side had to grind out large spells of the second half, but he will be frustrated his team only went into half-time just one goal to the good as Edouard had two one-on-one efforts saved by Karl-Johan Johnsson.

First impressions can be so deceptive. It took all of 25 seconds in the Parken Stadium for the apparent direction of travel to be established in this match and arguably the tie.

When Edouard was played in behind the Copenhagen defence inside the first minute, anyone who has watched him banging in the goals for fun this season was expecting the net to bulge. Only a fine save from Johnsson denied him.

Within the first three minutes, the goalkeeper had already laid down solid credentials for a man-of-the-match award. Another fine block to deny the rampaging Edouard and a follow-up save to keep out the Frenchman's compatriot Olivier Ntcham thrust him into the thick of the action.

Hurricane Edouard was at the forefront of Storm Celtic. How long could Copenhagen weather the waves of yellow and green? The answer was 14 minutes.

A flowing move was started by a pass out of defence from Christopher Jullien. Ryan Christie and James Forrest were then involved before the goal was sumptuously scored by Edouard with the deftest of delicate chips over the advancing keeper.

Nearly 4,000 Celtic fans celebrated wildly and urged their side to keep up the pressure. Another fine move shortly after the goal sent Forrest scampering towards the penalty area but he pulled his shot wide.

It was too early to suggest it was game over, but rarely will Celtic have enjoyed a more comfortable first 45 minutes away from home in the latter stages of European competition. Would they be made to pay a price for their profligacy? Within seven minutes of the restart, Copenhagen delivered their answer.

Ntcham dallied needlessly outside his own area, the ball was fed to N'Doye and from around 10 yards, on an angle, his finish was true off the inside of Forster's right-hand post. Suddenly the home side were level and totally re-energised.

Callum McGregor then blasted over from just outside the box when he had Christie to his right and Edouard to his left, Copenhagen's cover stretched to the limit. Had his decision making been better, Celtic's lead would surely have been restored.

A game the visitors had in the palm of their hand was all of a sudden up for grabs. The ebb and flow made for compulsive viewing but still the chances mainly fell Celtic's way. A Christie cross almost made its way straight into the net. A break involving Christie and Jonny Hayes then set up Edouard. His fourth big chance of the game - an instinctive first-time toe-poke - brought out the third big save from Johnsson.

The feeling that things may slip away from Celtic grew when captain Scott Brown went off injured, replaced by Nir Bitton.

Another substitute, Mikkel Kaufmann, caused big problems instantly when he came on for Copenhagen. Drawing a fine block from Jullien when played into the area, then winning the corner from which the game's major talking point emerged.

Celtic's first encounter with the Video Assistant Referee went against them - a penalty awarded for handball by Christie who will now miss the second leg due to his booking - as he jumped with his arm out in an aerial joust. The spot-kick taken by Stage was tipped brilliantly on to his right-hand post by Forster.

It was remarkable, given the first half, that Celtic were now clinging on to a draw. A late chance for Forrest that he squandered from a tight angle could have changed the narrative once more.

So Celtic fail to win a match for the first time this year, despite their numerous chances. The positive thing from their point of view? They have 90 minutes in Glasgow in front of their home fans to secure safe passage to the last 16.

They could have made the return leg all but a formality. Instead, their fate still hangs in the balance. 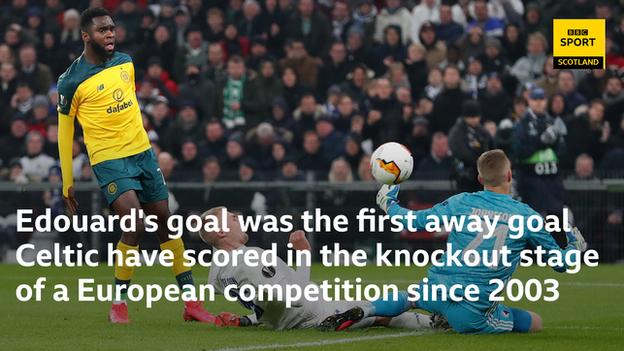