Dortmund will allow Sancho to leave in the summer and are looking at transfer targets to replace him. (Telegraph)

Manchester United are the new favourites to sign Sancho with Chelsea closing in on a deal for Ajax attacking midfielder Hakim Ziyech, 26. (Standard)

Chelsea and Manchester United are prepared to pay £35m for Birmingham midfielder Jude Bellingham, 16, plus £15m in add-ons. (Sun)

Manchester United striker Odion Ighalo, 30, has been banned from the club's training ground over fears of a potential coronavirus risk. (Mirror)

Liverpool are planning to swoop for RB Leipzig striker Timo Werner, 23, this summer and a fee of around £46m will be enough to sign him. (Bild)

Barcelona forward Philippe Coutinho, 27, has ruled out an emotional Liverpool return claiming he is on "another journey". (Sun)

Everton manager Carlo Ancelotti, 60, is already eyeing an extended stay at Goodison Park despite only signing a lengthy contract in December. (Mail)

Liverpool will battle Real Madrid for the signature of Inter Milan midfielder Marcelo Brozovic, 27, in the summer. (Star)

Chelsea in advanced talks to sign Ajax winger for £38m

Frank Lampard intends to sign at least four players this summer in a spending spree that will cost Chelsea upwards of £150m. (Metro)

Former Juventus and AC Milan manager Massimiliano Allegri reportedly has a deal in place with a "great English club" as rumours of a move to Manchester United gather pace. (Corriere dello Sport, via Mail)

Burnley's Ben Gibson has started training at hometown club Middlesbrough - even though the English defender is still under contract until 2022. (Mail)

Aston Villa failed to sign Islam Slimani, 31, in the January transfer window because the Leicester City striker did not want to play in a relegation battle. (Birmingham Mail)

Download and listen to the latest Football Daily podcast 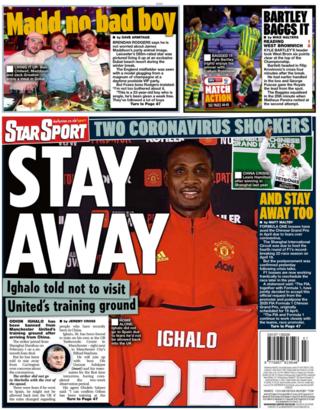 Back page of the Star

Federer out of French Open after surgery

Read more on Federer out of French Open after surgery