Manchester United's France midfielder Paul Pogba, 26, will seek to leave the club this summer, with 12 months remaining on his contract. (Manchester Evening News)

United have cooled interest in Leicester City's England midfielder James Maddison, with the 23-year-old set to sign a new deal with the Foxes. (Express)

Klopp is considering bringing Barcelona's 27-year-old Brazil midfielder Philippe Coutinho - who is on loan at Bayern Munich - back to Anfield. (Star)

Can Sheffield Utd qualify for Europe?

Chelsea's Italy midfielder Jorginho would be interested in teaming up with Maurizio Sarri again at Juventus, says the 28-year-old's agent says. (Mail)

Ajax and Cameroon goalkeeper Andre Onana, 23, is set to choose Chelsea in a £34m deal this summer, despite being linked with Barcelona and Paris St-Germain. (Caught Offside)

The release clause of Napoli's 28-year-old Senegal defender Kalidou Koulibaly, who has been linked with Manchester United, will be active from June - but it is £127m. (Mirror)

Celtic are lining up a summer deal for Cardiff City's English winger Josh Murphy after missing out on the 24-year-old on transfer deadline day. (Sun)

Everton's English forward Dominic Calvert-Lewin, 22, admits he is now "disappointed" when he does not score for the Toffees but has refused to reveal a goalscoring target. (Liverpool Echo)

French full-back Djibril Sidibe, 27, says he is "very, very happy" at Everton as the Toffees weigh-up whether to make his loan from Monaco permanent. (Liverpool Echo)

Real Madrid boss Zinedine Zidane says Wales forward Gareth Bale, 30, has an important role to play at the club after being recalled for the 4-1 win at Osasuna. (Marca - in Spanish) 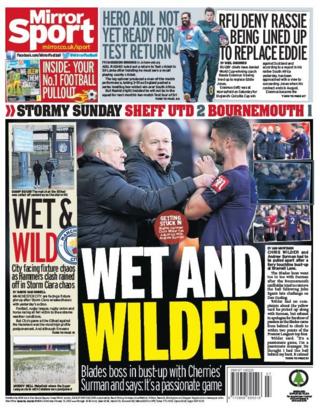 In the Daily Mirror, "Wet and Wilder"

Read more on Premier League restart date to be moved