Aston Villa's Jack Grealish, 24, will consider a summer move, despite his loyalty to his boyhood club. Manchester United and Manchester City have been linked with the English midfielder. (Telegraph)

Grealish sees Manchester United as his preferred destination this summer should he leave Aston Villa, despite reported interest from Barcelona and Real Madrid. (Sun)

Grealish has reportedly started house-hunting in Manchester in anticipation of a move to Old Trafford. (Goal)

Manchester City are ready to admit defeat in their bid to lure Lionel Messi to the Premier League next season after being told the Argentina forward, 32, has got no plans to leave Barcelona. (Express)

Manchester City's Raheem Sterling believes he can return to fitness for their Champions League tie against Real Madrid. The Spanish club is interested in signing the 25-year-old England forward. (Telegraph)

Paris St-Germain will send scouts to watch England left-back Danny Rose, 29, during his loan spell at Newcastle from Tottenham. (Sun)

Barcelona's Brazil midfielder Philippe Coutinho, 27 - currently on loan at Bayern Munich - will be allowed to leave for a cut-price £77m this summer, with Manchester United and his former club Liverpool thought to be interested in signing him. (Express)

Roma are upset that Manchester United have increased their asking price to £17m for former England central defender Chris Smalling, 30, who is on loan with the Italian club this season. (Express)

Wales forward Gareth Bale, 30, wanted to "make Chinese football great" when linked with a move to Asia in the summer of 2019, claims his agent, but is now planning on staying at Real Madrid and will not be heading back to the Premier League with his former club Tottenham. (Goal)

Uruguay striker Edinson Cavani, 32, linked with Manchester United and Chelsea in last month's transfer window, is open to a move to England when his contract at Paris St-Germain expires in the summer. (L'Equipe, via Star)

The Premier League is plotting to set up its own Netflix-style streaming service. (Times)

Former Arsenal midfielder Aaron Ramsey, 29, is being linked with a move away from Juventus, having only signed a four-year deal with the Italians last year. (Calciomercato - in Italian)

Liverpool may turn their attention to RB Leipzig's Germany striker Timo Werner, 23, in the summer - and are also likely to be in the market for a left-back. (Athletic, via Team Talk)

Liverpool are likely to sell 22-year-old Wales forward Harry Wilson, who is on loan at Bournemouth, this summer. (Football Insider)

Juventus boss Maurizio Sarri could make a move for Chelsea midfielder Jorginho, the 28-year-old Italy international he has worked with at Napoli and the Blues.(Star)

Bayern Munich have ruled out a move for Juventus and Portugal talisman Cristiano Ronaldo because they consider the 35-year-old forward too old. (Sun)

Barcelona have their eye on another Luis Suarez. Watford's 22-year-old Colombian striker, on loan at Real Zaragoza, could be a replacement for their injured Uruguayan forward, 33, of the same name. (AS)

Everton have been linked with Sporting's Rafa Camacho, the 19-year-old Portuguese winger formerly with Liverpool. (Star)

Liverpool have opened talks with Netherlands midfielder Georginio Wijnaldum, 29, about extending his contract, which expires in the summer of 2021. (Athletic, via Express)

Manchester United's Brazilian midfielder Fred, 26, has accused his team-mates of "lacking sticking together mentality" and claimed some of them have "different objectives". (Mail)

Everton are keen to sign 17-year-old Wigan striker Joe Gelhardt - who has been dubbed as the next Wayne Rooney. (Sun) 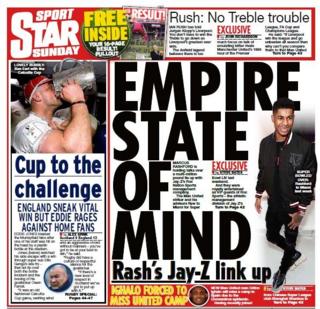 In the Star on Sunday, "Empire state of mind"