Manchester City think they will be first choice if 32-year-old Argentina forward Lionel Messi decides to leave Barca on a free transfer at the end of the season. (Manchester Evening News)

Wolves are preparing themselves for record-breaking bids for Spanish winger Adama Traore, 24, during the summer transfer window. (Telegraph)

The two clubs are also set to go head to head for the signature of Lyon's 23-year-old French forward Moussa Dembele. (Mirror)

Arsenal manager Mikel Arteta wants to sign two midfielders and a defender at the start of the summer transfer window before Euro 2020 gets under way. (Mail)

Jorginho's agent predicts that clubs will bid for the 28-year-old Italy midfielder this summer, which puts his future at Chelsea in doubt. (Mail)

Ukraine winger Andriy Yarmolenko, 30, is facing a battle for his future at West Ham United as he returns from injury, with boss David Moyes wanting to build around younger players. (Standard)

Roma and Turkey winger Cengiz Under, 22, is on Tottenham's radar, but the club will only make a move if they qualify for the Champions League. (Gunes, via Mail)

Manchester City are facing a frustrating wait in their efforts to stop winger Leroy Sane leaving for Bayern Munich this summer after the 24-year-old Germany international changed agents. (Telegraph)

Crystal Palace will tell manager Roy ­Hodgson they are committed to ­bringing in players this summer as the former England boss seeks assurances over their transfer plans amid his contract standoff. (Standard)

Palace will renew their interest in CSKA Moscow and Russia striker Fyodor Chalov, 21, in a bid to make Hodgson stay. (Star)

Former West Ham captain Kevin Nolan, 37, will return to the club as a first-team coach. (Sun)

Barcelona could sign Getafe's Spanish striker Angel Rodriguez, 32, as an emergency replacement for the injured Ousmane Dembele, if they can prove the 22-year-old France winger will be out for more than five months. (Marca) 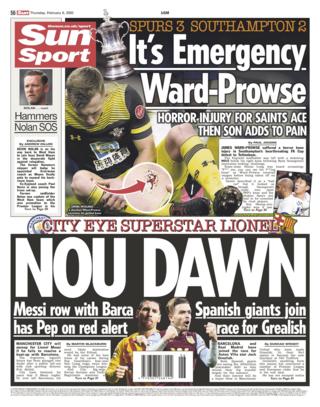 The Sun's back page