Barcelona are close to agreeing a deal for Chelsea's Brazil winger Willian, 31, whose contract expires at the end of the season. (Marca)

Arsenal manager Mikel Arteta blocked the transfer of German midfielder Mesut Ozil, 31, to a club from Qatar in January. (90min)

Everton manager Carlo Ancelotti has warned Barcelona they would be wasting their time if they submit an improved offer for Brazil forward Richarlison, 22, in the summer. (Star)

Manchester United are to step up their efforts to land Napoli defender Kalidou Koulibaly, 28. (Mirror)

Chelsea's France striker Olivier Giroud, 33, was upset after Serie A side Inter Milan pulled out of a transfer for him. (RMC, via Mail)

Manchester United and Chelsea failed in their attempts to sign Paris St-Germain's Edinson Cavani, 32, because the Uruguay forward has his heart set on a move to Spain. (Mirror)

Liverpool's Japan forward Takumi Minamino, 25, says other Premier League clubs were interested in signing him, as well as some Bundesliga sides. (Star)

Midfielder Steven Bergwijn, 22, who joined Tottenham from PSV Eindhoven in a £27m deal on Wednesday, rejected a £6m bonus offer from the Eredivisie side to stay. (Mirror)

Manchester United will pursue Birmingham City's 16-year-old England Under-17 midfielder Jude Bellingham in the summer after drawing up a £20m package on deadline day. (Independent)

Ighalo was shocked by United's deadline-day move after it had appeared the deal would not be happening. (Mail) 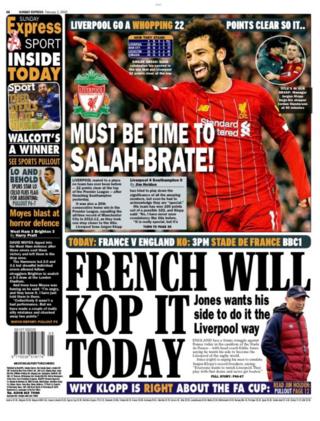 Express back page: 'Must be time to Salah-brate'