China has delayed the start of its domestic football season because of the escalation of the coronavirus, which has claimed at least 170 lives.

The Super League, which features ex-Premier League players including Yaya Toure, Marouane Fellaini, Oscar, Marko Arnautovic and Salomon Rondon, was due to run from 22 February to 31 October.

A new starting date for the season has not yet been announced.

Oher sporting events in China have also been affected by the crisis.

The men's alpine skiing World Cup races in China, scheduled for 15 and 16 February in Yanqing, have been cancelled.

The 2020 World Athletics Indoor Championships, due to be held from 13-15 March in Nanjing, have been pushed back 12 months after World Athletics sought advice from the World Health Organisation.

Formula 1 says it is "monitoring" the effects of the outbreak in China in the context of the country's Grand Prix in Shanghai from 17-19 April.

The all-electric Formula E series is also due to hold a race in Sanya, southern China, on 21 March and Formula E says it is also "closely monitoring" the situation in tandem with local authorities.

In a statement, the China Football Association said their move to postpone the "2020 season national football competitions at all levels" was taken to help with the "prevention and control of the pneumonia epidemic of the new coronavirus infection, and to protect the health of the majority of fans, media, players, coaches, game officials, clubs and district staff". 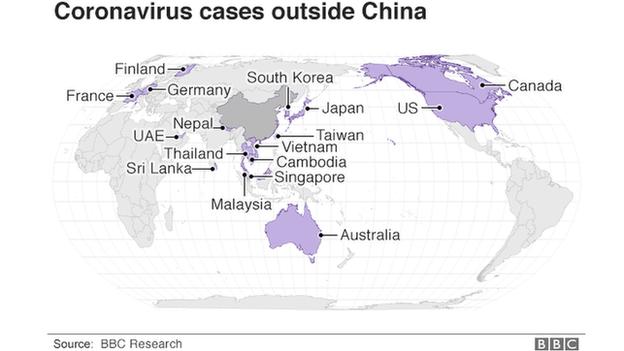 In Australia, China's women's football team has been forced into quarantine at a hotel in Brisbane, Queensland, after the state recorded its first case of coronavirus.

A 44-year-old man from Wuhan - the Chinese city at the centre of the outbreak - is in isolation at the Gold Coast University Hospital, south of Brisbane.

The China team had been due to open the Women's Olympic football tournament qualifiers with a match against Thailand in Sydney on Monday. The event will still go ahead but its schedule has been amended.

The death toll of the coronavirus has risen to 170 and with a confirmed case in Tibet, the virus has now spread to every region in mainland China.

Chinese health authorities have said there were 7,711 confirmed cases in the country as of 29 January and infections have also spread to at least 16 other countries.

The Foreign Office updated its advice on Tuesday to warn against all but essential travel to mainland China, saying it may also become more difficult for British nationals in other provinces to leave.

On Wednesday, British Airways announced it was suspending all flights to and from mainland China with immediate effect.