However, Chelsea have reportedly been offered Piatek. (Star)

The possible Saudi Arabia takeover of Newcastle United would see the new owners try to bring former Magpies manager Rafael Benitez, who is boss of Chinese club Dalian Yifang, back to the club. (Sun)

Manchester United have increased their bid for the Sporting Lisbon midfielder Bruno Fernandes to an initial £46.4m but the Portuguese club are expecting a better offer from another club for the Portugal international. (Times - subscription required)

Arsenal are set to battle with Everton to sign Real Madrid's Colombia midfielder James Rodriguez, 28. (AS, via Mail)

Tottenham will be entitled to £10m in compensation if former manager Mauricio Pochettino takes over another team before the end of the season. (Mirror)

Sheffield United have had a bid for Norway midfielder Sander Berge rejected by Genk, with West Ham also interested in the 21-year-old. (Mail)

"We will not be there"

Arsenal defender Shkodran Mustafi, 27, was linked with leaving the London side in the summer but Gunners boss Mikel Arteta believes he can turn around the German international's career at the club. (Telegraph)

Charlton could be set to sign Paul Pogba's brother Florentin, the 29-year-old Guinea international who has been training with the club's under-23s following his release from MLS side Atlanta. (Sun)

Manchester United are refusing to drop their £25m asking price for Chris Smalling despite a plea from Roma, where the 29-year-old English defender is on a season-long loan. (Sun)

Manchester United remain hopeful of a deal for Juventus and Germany midfielder Emre Can, 26, the former Liverpool player. (Express)

Burnley, Leeds, West Brom, Derby and Stoke are interested in St-Etienne defender Harold Moukoudi. The 22-year-old Cameroon international is available on loan until the end of the season. (L'Equipe) 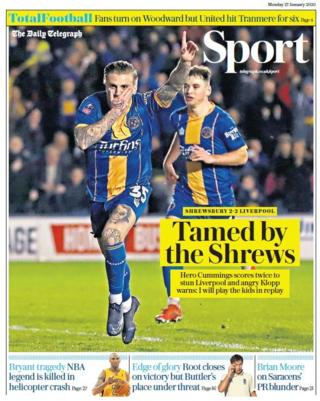 In the Daily Telegraph, "Tamed by the Shrews"