Substitutes Marko Arnautovic and Michael Gregoritsch earned Austria their first ever victory at a European Championship as Franco Foda's side edged past tournament debutants North Macedonia in their Group C opener.

Veteran Macedonian striker Goran Pandev looked to have earned a memorable point for Euro 2020's lowest-ranked side on his 120th appearance, 20 years on from his international debut.

The 37-year-old Genoa forward, part of Jose Mourinho's treble-winning Inter Milan side of 2009-10, pounced on a defensive mix-up and slotted in to an open goal after 28 minutes to cancel out Stefan Lainer's strike.

Borussia Monchengladbach right-back Lainer had produced a fine finish to give an uninspiring Austria the lead 10 minutes earlier, leaping to volley in Marcel Sabitzer's excellent pass.

Lainer held up a shirt reading "Eriksen stay strong" following his goal, after the Denmark midfielder collapsed in his side's Euro 2020 match against Finland on Saturday.

With the Netherlands and Ukraine to come, both sides played with greater urgency in a fiery second half and Austria manager Foda called on ex-West Ham forward Arnautovic and Gregoritsch to bolster the attack.

Dimitrievski was at full stretch to keep out Gregoritsch's glanced header, before the Augsburg player made the breakthrough and Arnautovic - Austria's top scorer in qualifying - grabbed his first international goal in two years.

The Macedonian supporters created a festival atmosphere - despite the rain at Romania's National Arena - but despite a promising showing it was not to be in their first match at a major tournament in their 27-year history.

North Macedonia face Ukraine on Thursday at 14:00 BST and Austria meet the Netherlands on the same day at 20:00. 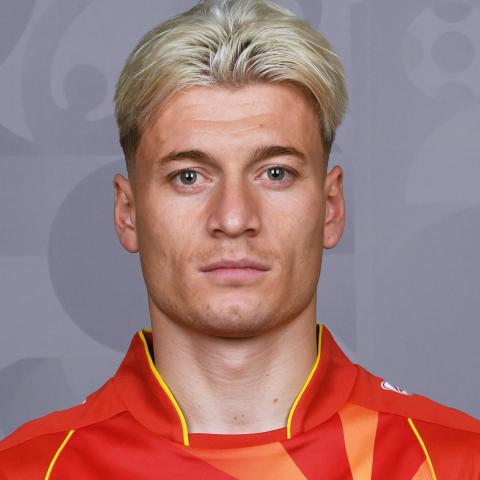