Tottenham will only allow Eriksen - whose contract runs out in the summer - to leave in January if Inter pay £17m. (Mail)

Liverpool is the "preferred goal" for RB Leipzig and Germany striker Timo Werner, 23, who wants to play in the Premier League. (Bild, via Sport Witness)

Manchester United would have to pay a significant transfer fee for Paris St-Germain and Uruguay striker Edinson Cavani, 32, this month rather than land him on loan - but the player is open to a January move. (Manchester Evening News)

Sporting Lisbon assistant coach Emanuel Ferro has played down the prospect of Portugal's 25-year-old midfielder Bruno Fernandes, who has been linked with Manchester United, leaving the club in January. (A Bola, via Mirror)

Manchester United are lining up Inter Milan and Uruguay midfielder Matias Vecino, 28, as a possible alternative to signing Fernandes. (Sky Italy, via Mirror)

Crystal Palace winger Wilfried Zaha has told the club he is willing to stay for the rest of the season, with no club willing to match the Selhurst Park side's £80m valuation of the Ivory Coast international. (Mail)

Manchester United manager Ole Gunnar Solskjaer's job is safe even if the club fail to qualify to play in Europe next season. (Sun)

Everton have rejected two offers for English defender Mason Holgate, with Newcastle United, Bournemouth and Sheffield United among the teams interested in the 23-year-old. (Football Insider)

Holgate is in line for an England call-up after boss Gareth Southgate and his staff have watched the Everton defender in his last three games. (Mirror)

Inter Milan are closing in on a loan deal for Chelsea wing-back Victor Moses, 29, to reunite him with former boss Antonio Conte. Fenerbahce, the club at which the Nigeria international is currently on loan, will not stand in the player's way. (Mail)

Liverpool are not willing to let Switzerland midfielder Xherdan Shaqiri, 28, leave the club this month amid interest from Roma. (Sky Sports)

Could Edinson Cavani be coming to the Premier League?

Tottenham are preparing to make a bid for Sheffield United's English defender Jack O'Connell, 25, and he is seen by Spurs as being a long-term replacement for Belgium international Jan Vertonghen, 32. (Star)

Spanish side Celta Vigo have been in contact with Southampton over a move for midfielder Oriol Romeu but the Saints do not want to let the 28-year-old Spaniard leave. (Southern Daily Echo)

Ex-Arsenal and Manchester United striker Robin van Persie has warned United not to rush striker Marcus Rashford, 22, back to action too quickly following his back injury. (Manchester Evening News)

Newcastle United are still hoping to sign Hull City forward Jarrod Bowen but are unimpressed with the Championship club's valuation of the player which is in excess of £20m. (Telegraph)

Leicester City have been linked with a move for Fenerbahce and Germany attacker Max Kruse, 31. (Haber Global, via Leicester Mercury)

Newcastle boss Steve Bruce is hopeful of sealing a deal for Inter Milan and Austria winger Valentino Lazaro, 23, in time for the weekend. (Newcastle Chronicle)

Wolves are interested in signing Dinamo Zagreb and Spain midfielder Dani Olmo, 21, in the January transfer window and are willing to pay up to 25m euros (£21.3m)(Sportske Novosti, via Calcio Mercato) 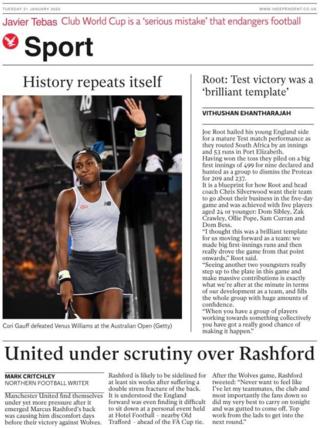 The back page of the Independent

Read more on Arsenal knocked out by last-gasp away goal