Bruno Fernandes, 25, has told Sporting Lisbon he is desperate to join Manchester United and more talks are scheduled this week after they stalled over the valuation of the Portugal midfielder. (Sky Sports)

Paris St-Germain and France left-back Layvin Kurzawa, 27, will join Arsenal on a free transfer when his contract ends in June and has agreed a five-year deal with the Gunners. (France Football - in French)

Arsenal will try to sign Bayern Munich and Germany defender Jerome Boateng, 31, on loan this month before making a £50m bid for French RB Leipzig centre-back Dayot Upamecano, 21, in the summer. (Star)

Inter Milan want to sign Tottenham and Denmark midfielder Christian Eriksen, 27, in time for their Serie A tie against Cagliari on 26 January. (Mail)

Who's the wolf in the chicken coop?

Find out in Garth Crooks' team of the week

Giroud is also a target for Aston Villa as they try to find cover for injured Brazil striker Wesley. (Le10 Sport, via Mail)

Antonio Conte has accused Jose Mourinho of twisting his words after the Spurs boss criticised his Inter counterpart for talking about Eriksen. (Mirror)

Tottenham could pursue a move for Leicester City and Algeria striker Islam Slimani, 31, who is currently on loan at Monaco. (Telegraph)

Manchester City and Manchester United have been linked with Inter Milan striker Lautaro Martinez but the 22-year-old Argentina international says he is happy at the Italian club. (Sun)

Lyon are interested in Athletico Paranaense's Brazilian defensive midfielder Bruno Guimaraes, 22, who is also a reported target for Arsenal. (L'Equipe - in French)

Real Madrid will announce the 30m euro (£25.6m) signing of Flamengo's Reinier Jesus on Monday now that the Brazilian midfielder has turned 18. (AS) 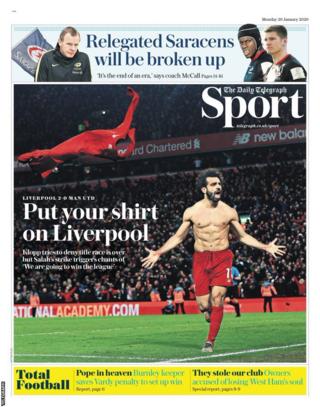 The back page of Monday's Telegraph