Chelsea have made West Ham defender Issa Diop their primary target and will bid £40m for the 22-year-old Frenchman. (Express)

Chelsea will only trigger a £40m buy-back option for Bournemouth and Netherlands centre-back Nathan Ake, 24, if they can offload 23-year-old Denmark defender Andreas Christensen. (Sun)

Tottenham, Arsenal and Manchester United are trying to sign centre-back Samuel Umtiti, 26, from Barcelona with the Spanish club keen to sell the France international. (El Desmarque - in Spanish)

Former Juventus boss Massimiliano Allegri has been delaying a return to management in the hope of replacing Ole Gunnar Solskjaer at Manchester United. (Mail)

Ajax are considering trying to bring Matthijs de Ligt back to the club on loan despite the 20-year-old Dutch defender only moving to Juventus during the summer. (A Bola - in Portuguese)

Manchester City are planning four to six signings this year, with a centre-back and left-back the priorities for manager Pep Guardiola. (Telegraph)

Brazil midfielder Fernandinho, 34, says he is close to activating clauses in his Manchester City contract which would automatically trigger a contract extension. (ESPN Brazil, via Mirror)

Lyon and France striker Moussa Dembele, 23, was watched by Chelsea and Manchester United scouts as he scored in his side's 3-1 French League Cup win over Stade Brest on Wednesday. (Mail)

Chelsea are unlikely to pursue a move for Crystal Palace and Ivory Coast winger Wilfried Zaha because manager Frank Lampard does not see the 27-year-old as the right fit for the squad. (90min)

Tottenham have joined the race to sign AC Milan's 24-year-old Poland international striker Krzysztof Piatek with the Italian side holding out for £30m. (Guardian)

Spurs have no immediate plans to sign a replacement for injured midfielder Moussa Sissoko, 30, who is out until April. The club are focusing on signing a midfielder if they sell Kenyan Victor Wanyama, 28, and Denmark international Christian Eriksen, 27. (Evening Standard)

The perfect man to argue your case...

Gareth from The Office = Gary Neville

Napoli and Poland striker Arkadiusz Milik, 25, has emerged as a target for Manchester United. (Sun)

Aston Villa are weighing up a move for Burnley and England striker Jay Rodriguez, 30. (The Athletic)

Arsenal midfielder Emile Smith-Rowe, 19, is set to leave on loan this month as the Gunners work on offloading as many as 12 players in a busy January window. (The Athletic - via Metro)

Sheffield United boss Chris Wilder has ruled out loan exits for midfielders Luke Freeman, 27, and Ben Osborn, 25, this month but a host of other names could be set for moves away from Bramall Lane. (Mirror) 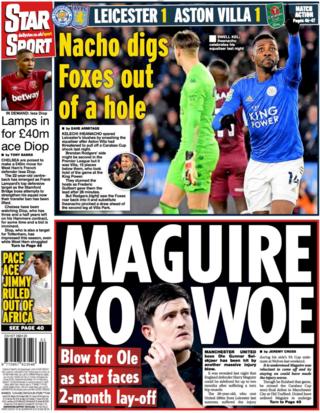 The Daily Star leads on Harry Maguire being injured

Sensational Fury stops Wilder in seventh round with stunning display

Serie A games postponed over coronavirus

Read more on Serie A games postponed over coronavirus