Pinpointing the precise moment when it all began to unravel for Manuel Pellegrini at West Ham is fairly easy.

Up to that point, West Ham had enjoyed a pretty good start to the season.

The previous week they had beaten Manchester United at London Stadium and were fifth in the Premier League with 11 points from six games, level on points with a Leicester side with whom they were expected to compete as the most likely outsider to gatecrash the 'top six'.

Then goalkeeper Lukasz Fabianski tore a hip muscle in the 2-2 draw at Bournemouth and was ruled out for three months. In the gap, West Ham's world collapsed.

They did not win again until the shock 1-0 success at Chelsea on 30 November.

When Pellegrini's exit was confirmed after a 2-1 home defeat by a Leicester side who had made nine changes from the team thrashed by Liverpool on Thursday, they had collected just eight points from their past 13 games, and teetered uncomfortably a point and a place above the relegation zone.

When he attracted Pellegrini to the club to replace David Moyes in the summer of 2018, West Ham chairman David Sullivan made a conscious decision to step back from major involvement in football affairs.

He let Pellegrini spend an unprecedented £170m over two summers. Felipe Anderson, Issa Diop and Pablo Fornals all cost in excess of £20m. Striker Sebastien Haller came in from Eintracht Frankfurt in the summer for a club record £45m.

Few of the signings lived up to their billing.

But it was a free transfer that caused Pellegrini the biggest problem. 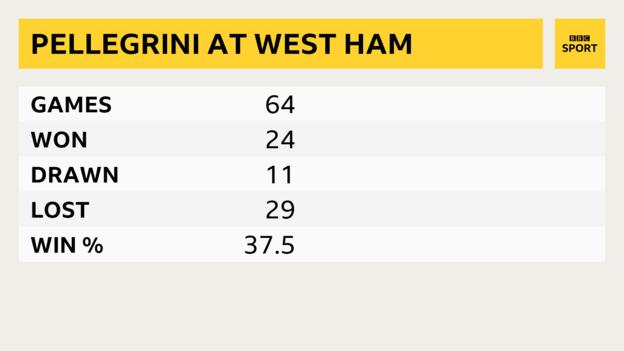 Club sources said the decision to sign Roberto as back-up to Fabianski was solely down to Pellegrini and his trusted ally Mario Husillos, who was appointed on a three-year deal around the same time as the Chilean.

As it turned out, Roberto - a 33-year-old former Atletico Madrid, Benfica and Espanyol goalkeeper - was terrible.

In his first six games, Roberto not only failed to keep a clean sheet, he twice conceded two goals and conceded three in each of his final three games. In his final appearance of that run, against Tottenham, he was ridiculed, loudly, by his own supporters.

It was impossible not to feel sorry for Roberto. But it underlined a lack of faith in him that extended far beyond the stands at London Stadium to senior officials at the club.

After that game it is understood contact was made with former Millwall manager Neil Harris for an assessment of David Martin, who had been signed as a training goalkeeper in the summer.

That the call came from outside Pellegrini's coaching group underlined a loss of faith in the 66-year-old, whose title-winning managerial abilities from his time at Manchester City had not transferred south.

As it turned out, Martin played in the following game at Chelsea, which West Ham won, and also at Southampton three games later, when, again, the Hammers were victorious.

But injury kept Martin out of the pivotal Boxing Day trip to Crystal Palace and with Fabianski not quite ready to return, Roberto came back, and the Hammers lost after leading midway through the second half.

It would be wrong to pin all West Ham's troubles on Roberto. West Ham placed unprecedented faith in Pellegrini to bring success to the football side of the club after managing director Karren Brady had helped end the very public dispute with their London Stadium landlords.

While it could not be argued Hammers fans were finally happy in their new home, the venomous hostility that spilled over at the infamous home game against Burnley in March 2018 had at least eased. 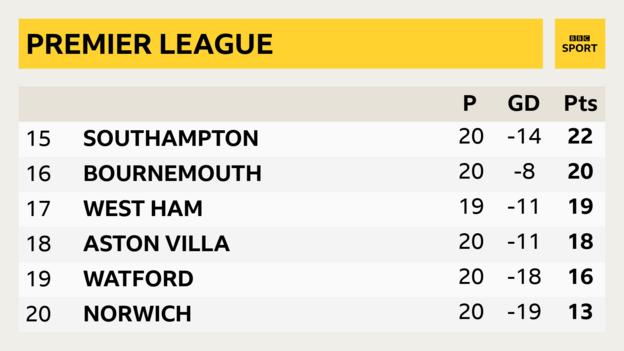 Yet Pellegrini struggled to get the most from his players.

Anderson was a fitful performer, with many feeling being stuck out wide denied him the freedom to express himself.

Haller scored three times in his first three games but has done so only twice since. Fornals scored the final goal of Pellegrini's reign but it was the only time he found the net in the Premier League under the former Real Madrid coach. Against Leicester, he was replaced with 35 minutes remaining even though West Ham were desperate for a goal.

Pellegrini said his side needed to prioritise their home form but they managed just one point from their six home games following the win over Manchester United and his players seemed unsure of the roles they were being asked to carry out.

When West Ham told David Moyes his services were no longer required in May 2018, their official statement said they wanted to take the club in a different direction.

Hurtling headlong into the Championship was not the direction they had in mind.

After a great deal of negotiation, home capacity has been raised to 60,000, is due to go up to 62,500 and should eventually reach 66,000. This has not been done to host the likes of Reading and Wigan.

Fairly or otherwise, Sullivan, his co-owner David Gold and Brady do not have great reputations among the Hammers support, who feel they are not maximising the club's potential.

Part of this is natural supporter demand to want more than they have, disregarding the consequences of overspending and getting it wrong. But the fury at taking the club out of Upton Park has never completely gone away, even though most accept the stadium was a relic and not fit for a modern-day Premier League club.

Against that backdrop, any appointment will be greeted with scepticism.

If Moyes returns, and that is the strong rumour at present, it may feel like a backward step to some, even if the Scot did a decent job last time around when, again, the club appeared in freefall under Slaven Bilic.

Others like Sean Dyche and Eddie Howe have been mentioned before and not ended up at the club. Former Brighton boss Chris Hughton is another from the solid rather than spectacular category. Former player Paolo di Canio is an erratic fans' favourite.

Rafael Benitez is an interesting option though. Sullivan gets on with the former Liverpool boss and thought long and hard about trying to recruit him to replace Moyes but plumped for Pellegrini instead.