Manchester City were shocked by Arsenal's official announcement of their appointment of Mikel Arteta as manager after finding out via TV and social media. (Mail)

Raiola said he was "sorry" he had been unable to unite Pogba with Real Madrid's French manager Zinedine Zidane in the summer window. (Star)

Meanwhile, United will refuse to allow Pogba's future to be linked to any negotiations for RB Salzburg's Norway forward Erling Braut Haaland, 19, by Raiola, who represents both players. (Standard)

Pep Guardiola's future as Manchester City manager depends on whether he receives backing in the Champions League. (The Athletic, via Mirror)

Arsenal's Switzerland midfielder Granit Xhaka, 27, is in talks with Hertha Berlin over a January move to the Bundesliga side. (ESPN)

The Premier League's iconic player of the decade

Who is your iconic player of the decade in English football?

Wolves will not sell Spanish winger Adama Traore, 23, who is attracting interest from Tottenham. Traore became Wolves' club record signing in August 2018 after the club met the £18m release clause in his Middlesbrough contract. (Sun)

Bordeaux are interested in a January move for Chelsea's Olivier Giroud, but the 33-year-old France forward is hoping to join Inter Milan. (Goal)

Former Manchester United and Sweden striker Zlatan Ibrahimovic, 38, is open to a move to Everton once Carlo Ancelotti's appointment as manager is confirmed. (Talksport)

Serie A clubs Juventus and Inter Milan are set to battle it out for Sweden and Atalanta midfielder Dejan Kulusevski, 19, Italy and Brescia midfielder Sandro Tonali, 19, and Italy and Fiorentina forward Federico Chiesa, 22. (Calciomercato)

Paris St-Germain are in talks with Juventus over a swap deal for Germany midfielder Emre Can, 25, which could see Argentina midfielder Leandro Paredes, 25, move in the opposite direction. (Mail) 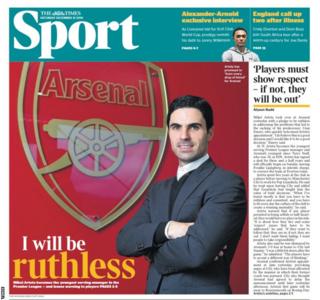 Saturday's Times back page: 'I will be ruthless'

Read more on My father died with coronavirus - Yarde

Read more on 'Season could continue until January'