Manchester City are demanding £1m from Arsenal to release assistant Mikel Arteta from his contract, with the Gunners wanting to name their former Spanish midfielder as their new manager. (Mail)

Carlo Ancelotti is set to be named Everton manager after signing an £11.5m-a-year deal. (Mirror)

The Italian, 60, will start work as Toffees boss on Monday. (Sun)

Spurs will provide boss Jose Mourinho with transfer funds but the Portuguese is not expected to spend big in January, with West Brom defender Nathan Ferguson and Norwich right-back Max Aarons, both 19, among the targets. (Mail)

What was the moment of the decade in English football?

Paris St-Germain will line up a move to bring Pep Guardiola to the Parc des Princes to replace Thomas Tuchel. (Le 10 Sport via Daily Mail)

The Abu Dhabi consortium set to take over at Charlton Athletic was questioned by the English Football League over the extent of its links with the owners of Manchester City. (Telegraph)

Spanish midfielder Marcos Llorente, 24, is wanted by clubs this January but Atletico Madrid do not want to sell him. (AS - in Spanish)

Rangers target Mostafa Mohamed has been the subject of two offers from European clubs, but Zamalek want £5m to secure the 22-year-old Egyptian's services. (Daily Record)

Aston Villa are in danger of becoming the first Premier League club to breach Financial Fair Play rules and may need to sell to ensure they comply with regulations this season. (Mail) 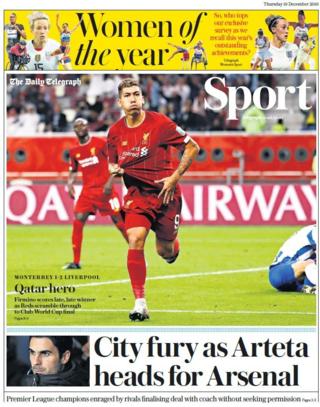