I see huge limitations when I look at Tottenham's midfield at the moment.

And, while I have been massively impressed by the impact Jose Mourinho has made in his first few weeks as Spurs boss, it is an area of the team he will have to address in order to continue their upturn in form.

While Tottenham still ended up nicking all three points against Wolves on Sunday, they went long periods without having proper possession, or the ability to control the game that comes with it.

Part of the problem was pairing Eric Dier and Moussa Sissoko together because they are just not good enough on the ball.

They do not have enough guile or finesse and if you press them, like Wolves did, they will probably give the ball away more often than not.

When that happens, you are unable to dictate the tempo of the game and you are going to concede goals. 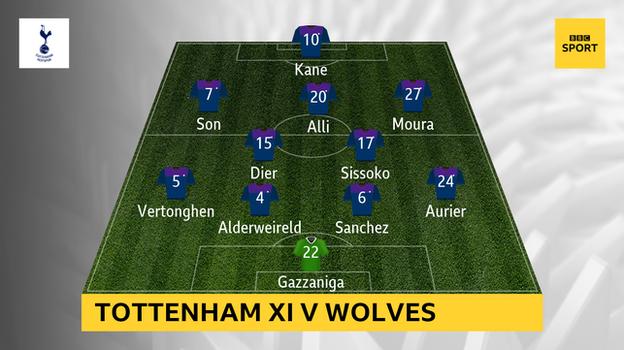 Lack of control can prove costly

They got away with it against Wolves, but that lack of control was what cost Spurs when they lost to Manchester United at the start of this month.

Mourinho had Sissoko, Davinson Sanchez and Serge Aurier operating on the right, which brought strength and power to the team, plus athleticism - which is another attribute he likes.

But there was very little guile there and if you pressed that side of the pitch, like United did to score their opening goal, Spurs could not get out.

The Tottenham midfield has the same problem when Dier and Sissoko are together in a 4-2-3-1 shape. They played too many backward passes against Wolves.

What happens is the team tries to bypass them and attempts to get the ball to their front four as quickly as possible.

That is understandable really, because of how good those forwards are, and sometimes that direct approach will work.

But in certain games - like Wolves, United and Bayern in the past couple of weeks - you are going to be vulnerable whenever you lose the ball.

There is only so much pressure your defence can take when you are not keeping possession, and the ball is always coming straight back at them.

What Spurs need is balance

I don't think Mourinho knows his first-choice midfield pairing yet, because he has tried several different combinations already.

Dier and Sissoko have started the last three matches, but Mourinho might be thinking that he cannot rely on Harry Winks at the moment because he has been out injured.

I do think Winks fits the profile of a holding midfielder in a Mourinho team, though.

He is good on the ball, will sit in and not venture forward too often, and can get out of tight spaces. If he maintains his fitness, there will be a place for him.

With Tanguy Ndombele, I am not so sure. For me, he is probably Tottenham's best midfielder but Mourinho has not used him much when he has been fit, so I don't really know what he makes of him yet.

One player he definitely likes is Dier, who has had more minutes under him than any other midfielder.

I don't think Dier is fully fit either, because he has only started playing regularly again after spending most of the past 12 months managing injury and illness.

It could be Mourinho feels that, once Dier is 100% again, he can trust him every week to do the job he is asking him to do.

That is fine, but what Spurs need in that area is balance - and they do not get it from playing Sissoko alongside him.

Yes, Sissoko is a different kind of player because he can burst forward while he has the ball at his feet, but if you press Dier then he is either going to pass the ball backwards or kick it out of play - he is not going to go past anyone.

That might be down to a lack of fitness or confidence so I am prepared to give him the benefit of the doubt, but if Tottenham want to finish in the top four they cannot afford to be patient and wait for him to get back to form.

Until that situation is sorted, and a proper pairing emerges, then it is an area for concern - and definitely somewhere Spurs can improve.

The midfield is really the only negative from Mourinho's first month as manager.

Apart from that, we have seen a huge improvement in results plus team and individual performances - such as with Dele Alli, for example.

Mourinho has already found a way of maximising Tottenham's threat from an attacking point of view, and the players have adapted to that straight away.

There has been something positive about most of their performances under him, and results have generally been good too.

One of the big things he has already identified is the vulnerability of the team, and I think he is working hard to put that right.

I don't mean any tactical weakness, more their state of mind.

Yes, part of his time has to go on coaching and setting up the team the way he wants it, but he has also been trying to restore confidence, arrogance and belief to this Spurs side.

As a team, they had completely lost that, especially at home, because they had suffered a few dodgy results there.

The final piece in the puzzle?

Overall, I think Mourinho's arrival has been really positive, and credit needs to go to Spurs chairman Daniel Levy for acting when he did.

I cannot think of anyone else connected to the club who would have made the decision then to look Mauricio Pochettino in the eye, and say 'this is the end', but Levy did.

Now the dust has settled, you can see he was right.

Levy also had a clear vision as to what he wanted the next step to be, which is not only to be competing for trophies, but winning them.

That is why he went for Mourinho - he sees him as the final piece in the puzzle.

Timing-wise, it was a great move. Other Premier League clubs sat and waited before sacking their manager, and have since delayed appointing a replacement.

Levy went ahead, because he knew exactly who he wanted.

The players deserve praise for responding in the manner they have done, but Mourinho has clearly made a difference - look at where Spurs were when he took over, and where they are now.

His objective now will still be to win a trophy this season, as well as getting in the top four, and I genuinely believe he will look at his squad and think he can do it with them.