On 8 January 2010, the Africa Cup of Nations in Angola was just days away.

I was in the province of Cabinda, preparing to cover Group B for the BBC World Service, and was also charged with handing over the BBC African Footballer of the Year trophy to the newly-crowned winner, Ivory Coast captain Didier Drogba.

As the day wore on, unconfirmed reports of a shooting, apparently involving the Togo national team, started coming through. The detail was sketchy, but it was clear that something serious had happened.

Just how serious was spelled out when I encountered the squad, walking back to their hotel in Cabinda city.

Asking to speak to someone, I was immediately told the team spokesman would be their best-known player - then Manchester City star Emmanuel Adebayor.

When he sat down to speak, he gave horrifying details of an attack which left two members of the Togo delegation dead and resulted in life changing injuries to a number of others.

Revisiting that interview, and hearing from other squad members 10 years on, here is the story of an assault which made global headlines, and its aftermath.

The days leading up to the 2010 Nations Cup saw Togo's squad in good spirits. They were back at the tournament after missing out in 2008 and were preparing to take on a group featuring some of the biggest names in African football - Drogba's Ivory Coast and Michael Essien's Ghana were drawn in the same pool.

Togo's pre-tournament camp was set for Pointe Noir in the Republic of Congo, just over 100km from where their group games were to be played, in the Angolan city of Cabinda. 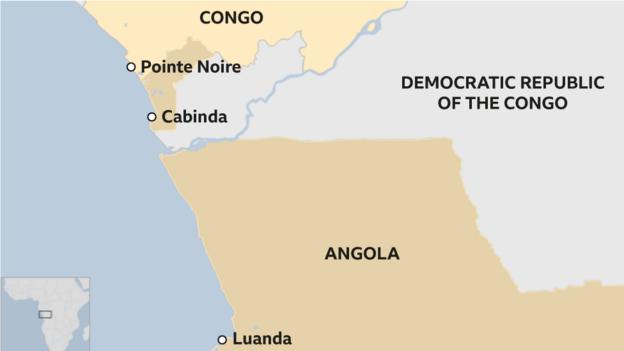 Cabinda is separate from the rest of Angola, and rather than fly over their destination to the capital Luanda and then fly back north again, Togo chose to drive. It was a decision that was to have fatal consequences.

After a relaxing evening the night before - some had even been out on the town, to the annoyance of their coaches - the squad travelled to the border. There was a carefree atmosphere on the bus, with players laughing and joking amongst themselves - a group of talented young men, preparing for one of the high points of their careers.

At the border they were joined by Angolan security forces, who were to escort them through the forest - an area known as a base for groups calling for the region's independence from Angola - to Cabinda city. The squad didn't pay much attention to their arrival. Soon they would be fighting for the lives of everyone on the Togo team bus.

The small convoy moved off from the border, and onto the road through the forest. Looking back 10 years, midfielder Junior Senaya recalls that journey, and the moment everything changed.

"We were all enjoying, after we had crossed the border. Some of us were busy listening to music. I remember after 15 minutes of driving we heard a gunshot in the forest - we all laughed, made a joke. Then at the same time it was followed by intense shooting."

The first casualties were inflicted before anyone even had a chance to realise what was going on.

Senaya remembers Togo's media officer, Stanislas Ocloo, was standing to take video footage of their arrival in Angola at the moment of the attack. He was shot and killed.

Another player who remembers all too clearly those frantic moments is goalkeeper Kodjovi Obilale. His life was transformed in just a few seconds, as he realised that he too had been hit.

"I heard the sound of a machine gun," he says, "and at the very moment I wanted to move to hide, it was as if I was nailed to the seat.

"That is when I saw myself - both my belly and my back were bleeding. That's when I began to panic. I said: 'I've been hit, help me, help me, I want to see my daughter, my son. I don't want to die here.'"

Even as he dealt with his own injuries, and fear, Obilale was able to absorb and detail the horror of what was unfolding.

He recalls assistant coach Amelete Abalo calling out that he had been shot - the 54-year-old was one of those to die in the attack. He remembers an unnamed team-mate who had military training calling for a weapon, so that he could fight back.

The team weren't able to escape from the shooting because the bus driver - Mario Adjoua - had also been grievously wounded at the start of the assault.

The convoy was forced to halt, and a vicious firefight broke out between the attackers and the security forces. Memories of how long it lasted vary, but everyone agrees it was at least 30 minutes.

Adebayor talked about the intensity of the longest half hour of his life.

"It's not like one or two guys shooting one or two times on our bus," he told me in the safety of the team hotel a few hours after the attack.

"We have been in the middle of that for 30 minutes or even a little bit more. Our bus has been stopped and people have been shooting at our bus for 30 minutes. Can you imagine? To be honest it's one of the worst experiences I will ever have in my life.

"Without the security then I would not be here talking to you. Maybe you could talk to my dead body."

Accounts of how it all came to an end vary - Adebayor described a fleet of 4x4 vehicles arriving to take the squad away even as shooting was still coming from the forest, whilst Senaya recalls silence.

But they were eventually all taken to hospital on the outskirts of Cabinda City, where those unscathed helped carry their dead and injured colleagues inside.

"Those are the times that you realise what is happening really, when I took one of the players into the hospital," Adebayor said.

"When I came out, I saw all the players, and everyone was crying, everyone was talking about their family, calling people, calling their mum, crying on the phone.

"I think that was the worst moment of this day, because you could see people telling their last words, because they thought they would be dead."

Shortly after that the squad were essentially left alone, with just a couple of local officials with them.

With dead and injured friends and colleagues in the hospital, they had to walk the short distance to their hotel compound, without any security whatsoever.

That's where I came across them, and I walked with the team as they went back to their accommodation.

All four teams in the group were staying in the same compound and Kolo Toure and a couple of other Ivorians came to offer condolences and find out what had happened - rumours had already spread.

The survivors then sat down to eat - it was late in the evening by this point and they hadn't had anything since the start of the day.

It was a sombre and silent meal, but afterwards Adebayor, with eloquence and anger, told the BBC what happened.

The news of the attack made global headlines, and where 24 hours earlier I had been able to walk in simply wearing tournament accreditation, the next day heavy paramilitary security surrounded the hotel complex.

Officials, government ministers and representatives of the Confederation of African Football flew in from Angola's capital Luanda, with questions raging about what had happened, who was responsible, and why - in apparent contravention of tournament rules - Togo had decided to drive instead of fly.

Shortly after the attack there was a claim of responsibility from the Front for the Liberation of the Enclave of Cabinda, a separatist group which had never accepted the decision of the former colonial power, Portugal, to integrate Cabinda into Angola in the late 1950s.

There were several factions of the body, and which one was responsible has always been contentious - but it was clear from very early on that this was no attempted robbery.

Another question lay in the presence of the Angolan security that travelled with the team. If Togo were not authorised to drive to Cabinda, why and how did they come to have an escort? And was it the militarised escort which prompted the attack?

None of these questions have clear answers, even 10 years on - and at the time the most immediate issue for the players was to absorb what had happened to them and decide what to do next.

For several days it was unclear to those of us watching from the outside what would happen.

Rumours suggested there was a split between those in the camp who wanted to continue with the tournament and those who wanted to go home.

In the end, the decision was taken by the Togolese authorities in Lome, who called the squad home to attend the funerals of those who died and take part in ceremonies of national mourning - a decision which later prompted a short-lived ban from the Confederation of African Football, for alleged "government interference" in football.

A few days after their terrifying experience, Togo's Sparrowhawks swept out of their hotel complex in another heavily armed convoy, this time heading towards Cabinda's airport, and left.

But the consequences of what happened would not be easily left behind for anyone who had been caught up in the assault.

Two people had died and a number of others had been seriously wounded - the worst being the goalkeeper, Obilale.

Initially it was reported that he too had died. That wasn't true, but he had suffered grave damage to his spine, intestines, liver and bladder, and was transferred to hospital in South Africa, to begin a gruelling recovery.

In the years since he has faced eight major operations and has had to rebuild his life, physically and emotionally.

"I've done a lot of things, and I'm glad I've done them. I went back to school, took exams, worked and have written a book," he says now.

For a long time he worked with children with special needs, helping them through the medium of football, and he has now set up his own organisation to continue that work.

Obilale lost his livelihood - and almost his life - in Cabinda and it is striking that he says that it is only since the change in leadership at the Confederation of African Football in 2017, when current president Ahmad ousted Issa Hayatou, that he has had any meaningful contact with the continental governing body.

On Tuesday night he was given a special award by Caf, 10 years on from Cabinda, recognising his achievement in his recovery, and what he does now to help others.

Cameroon legend Samuel Eto'o was the host in Hurghada, and he is one of several former players who have provided consistent support. Others are his former captain Adebayor and Ghana's Ayew brothers - Andre Ayew and his brother Rahim were part of the Black Stars squad which played in Cabinda in 2010.

Even those who were physically unharmed faced significant challenges in the wake of the attack.

Junior Senaya, a player who had helped take Togo to their remarkable first World Cup in Germany in 2006, was only 25 when it all unfolded, but his football career effectively ended that day.

"It was psychologically catastrophic, it turned [things] upside down," he says now.

"I really could not recover... I found no reason at all to play football at my club because psychologically I was shocked."

He is now studying for his coaching badges.

It lasted a matter of half an hour, maybe a little more. Why and how it happened is still the subject of some dispute.

But no one can deny the human cost of that short bus trip in Cabinda, 10 years ago.

Additional research and reporting by Blame Ekoue in Lome and Victoire Eyoum in London.