Rangers narrowed the gap on Scottish Premiership leaders Celtic to two points with a convincing victory over 10-man Hibernian at Easter Road.

A blistering start did the damage, with Ryan Kent profiting from an Ofir Marciano error to steer in the opener before Joe Aribo added a classy second inside eight minutes.

Jermain Defoe marked his first start in almost a month with the third after the break to seal victory, before Ryan Porteous saw red on the hour for a reckless lunge on Borna Barisic.

The centre-back's dismissal sparked chaos. Objects, including a glass bottle, were thrown at Barisic as he lay injured and a melee in the dugouts led to Hibs assistant John Potter and Rangers coach Tom Culshaw being sent off.

Steven Gerrard's side will find themselves five adrift again on Saturday should Celtic beat Aberdeen, but there was plenty for the Ibrox manager to enjoy in this win.

For Hibs manager Jack Ross, it is a third defeat in four as his side remain in sixth place before the Boxing Day Edinburgh derby meeting with Hearts at Tynecastle.

No Morelos, no problem

With no Alfredo Morelos - the striker suspended after his red card at Motherwell last Sunday - and no wins in their past three visits to Easter Road, this was a test of Rangers' title credentials.

The question of how they would cope without their 27-goal Colombian was emphatically answered. They were helped on their way by a Marciano howler after just three minutes.

There was no danger as Lewis Stevenson rolled a pass back to his goalkeeper, but Marciano dawdled on the ball far too long. Aribo raced in and charged down the clearance, which was scuffed towards Kent at the edge of the box, and he planted into the empty net.

A terrific second quickly followed. Lovely interplay down the right between Ryan Jack and Aribo ended with the latter cushioning a first-time finish in at the far post.

Hibs didn't know what had hit them or how to muster a response. They were being overrun in midfield where their lack of steel was exposed time and again and their diamond formation was allowing Rangers to run riot down the flanks.

The chances kept coming for the visitors and Kent was beginning to show the form that convinced Rangers to part with £7m to lure him from Liverpool.

He had a goal-bound shot directed wide by Porteous before slicing Hibs open with an incisive pass to Aribo, with Marciano sticking out a leg to deny the midfielder a second goal. 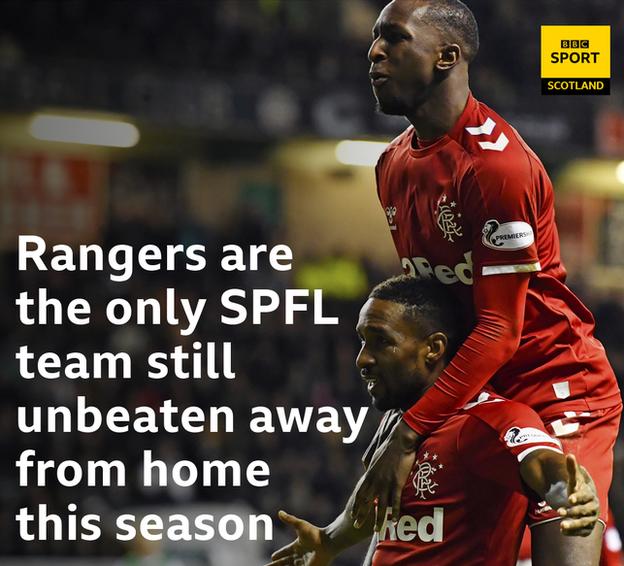 Florian Kamberi had lashed a close-range strike into the side netting at the other end, but it took Hibs half an hour to force Allan McGregor into action, the keeper tipping a rasping Martin Boyle drive wide of the far post.

Hibs were in danger of being on the end of a hiding and Ross took drastic action at half-time, replacing Stevie Mallan and Kamberi with Daryl Horgan and Vykintas Slivka. It did little to stem the flow as Ross suffered the first back-to-back defeats of his short reign.

Horgan almost made an immediate impact, sending in a delicious cross that narrowly evaded Christian Doidge six yards out and had McGregor scrambling as the ball dropped inches wide of the upright.

But Rangers soon resumed their dominance and Aribo galloped clear down the right before shanking his shot horribly off target.

Having squandered a 2-0 lead to draw at Aberdeen at the start of the month, the warning signs were clear for Rangers. But Defoe ensured there would be no such slip-up this time.

Scott Arfield's header looped to the feet of the striker, who took his tally to 14 goals this season with a clinical touch and powerful near-post finish.

Hibs' frustrations boiled over on the hour when Porteous flew into Barisic and the ensuring unsavoury scenes turned the atmosphere toxic.

The hosts avoided further damage, with Brandon Barker denied a goal against his old club by the feet of Marciano.

And Ross' debut Edinburgh derby on Boxing Day now carries extra significance with the feelgood factor and results which followed his arrival starting to wane.

Man of the match - Ryan Kent

All the plaudits must go to the Rangers players. Aribo's wonderful finish was worthy of three points on its own while Arfield continued where he left off at Fir Park on Sunday.

Best of the bunch, though, was Kent. The Liverpudlian has had a tough time since making his loan move to Ibrox permanent and now looks like he is starting to return to peak form after a spell out with injury.

Hibernian head coach Jack Ross: "We were a long way short of where we needed to be. The start of the game makes it very difficult for us, particularly against one of the top two sides in the league.

"It made it a long and difficult evening, but we need to be better in the basic part of the game to produce a better result."

"The first touch and second touch are world class and he does what he does."