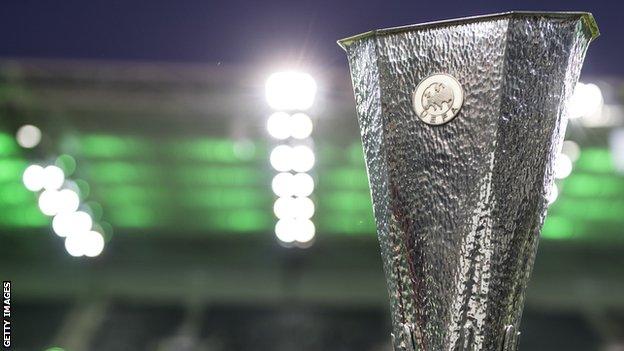 Rangers could face the likes of Arsenal, Inter Milan or Manchester United in the last 32 of the Europa League. Celtic might be paired with Roma, Bayer Leverkusen or Shakhtar Donetsk.

The Scottish Premiership title contenders will find out their fate on Monday, with the ties taking place 20 and 27 February.

With a couple of minutes to go at Ibrox, both Old Firm clubs were poised to be among the seeded sides.

But Borna Barisic's late own goal meant Steven Gerrard's side slipped to second place in their group and so face a potentially more testing tie in their first knockout contest since 2010-11.

First things first, Celtic and Rangers cannot face each other in the next round, as teams from the same country are kept apart until the last 16.

Likewise, Neil Lennon's side will not be paired with group rivals Cluj and Steven Gerrard's men will avoid Porto.

That means there are 14 potential ties for each Glasgow club - some more appealing and some more daunting that others.

Being seeded does not necessarily protect Celtic from a tough test. After beating Lazio home and away in the group stage, they could return to the Stadio Olimpico to face Roma.

Alternative 'rewards' for finishing top of their section could be ties against Bayer Leverkusen or Shakhtar Donetsk. English Premier League side Wolverhampton Wanderers are also potential opponents. 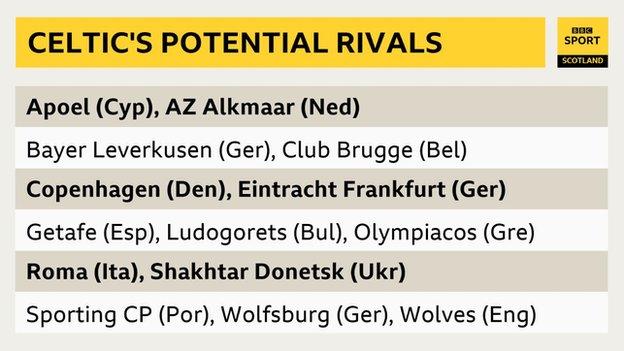 An all-British tie could also be on the cards, with Arsenal and Manchester United among the seeded sides.

However, despite being unseeded, there are one or two more favourable-looking match-ups for Gerrard's team.

Lask of Austria, Sweden's Malmo, and Gent of Belgium would all offer a significantly less intimidating opposition than some of the other clubs in the draw. 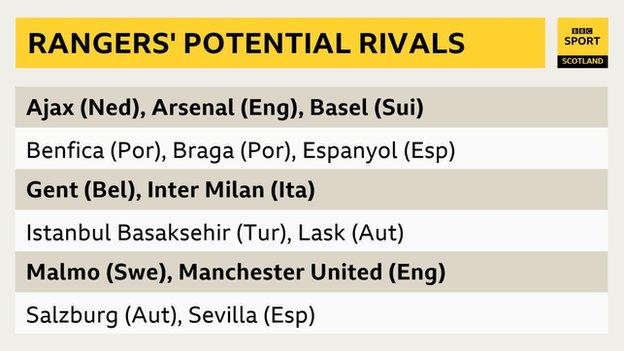 What's the script with the coefficient?

Thursday was a rare night of bad news on that front, despite both Scottish teams confirming their progression from the group stages.

The fact neither Celtic nor Rangers won - coupled with the fact Apoel Nicosia beat Sevilla - means Cyprus nudge back above Scotland into the all-important 15th place in the Uefa rankings.

Only the top 15 will be guaranteed two Champions League places for 2021-22 but don't fret, there is still time to turn it around.

Scotland have two teams left, compared to Cyprus' one, and a draw from either Celtic or Rangers in the last 32 would move Scotland back into 15th should Apoel lose both legs of their tie.

Furthermore, one more win and a draw would mean the Czech Republic would be usurped - and given they have no teams left, that might prove more likely. Similarly, Denmark are not out of reach either. 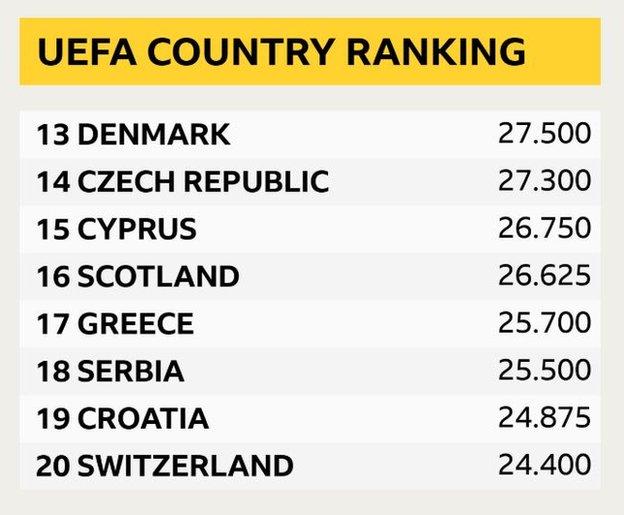