Pep Guardiola has a break clause in his contract which could see him leave Manchester City at the end of this season. (Mail)

Former West Ham boss Harry Redknapp has also emerged as a contender to become the next Hammers manager. (Football Insider)

Arsenal and Everton will not have to pay Napoli any compensation if they appoint Carlo Ancelotti, who was sacked by the Italian club earlier this week, as their next manager. (Mail)

Everton have held talks with ex-Arsenal boss Unai Emery but are unlikely to appoint the Spaniard, who is keen on managing in the Premier League again. (ESPN)

Red Bull Salzburg's Leeds-born Norway striker Erling Braut Haaland, 19, is considering offers from Borussia Dortmund and RB Leipzig but is expected to hold talks with Manchester United and Juventus before deciding on his future. (Guardian)

Crystal Palace will demand £80m for Ivory Coast forward Wilfried Zaha, 27, who has been linked with Chelsea. (Evening Standard)

Napoli are considering a £21m offer to Arsenal for Uruguay midfielder Lucas Torreira if the Gunners do not allow the 23-year-old to leave on loan during the January transfer window. (Il Mattino - in Italian)

Brazil forward Neymar, 27, has promised he is "happy" at Paris St-Germain, having wanted to leave the French club earlier in the season. (AS)

Former England midfielder Jack Rodwell, 28, is training with Sheffield United as he tries to convince the Blades to sign him. (Telegraph)

It's time for the Premier League predictions

Chelsea's Spain winger Pedro Rodriguez, 32, out of contract at the end of the season, would welcome the chance of playing for Barcelona again. (Sport)

Barcelona have sent officials to Milan to discuss a deal for Boga. (Sport)

Rangers have told Colombia striker Alfredo Morelos, 23, they will not let him leave in January. (Football Insider)

England defender Danny Rose, 29, says he does not need to discuss his future with Tottenham boss Jose Mourinho and that he will still be running his contract down. (Mirror)

Football League clubs have discussed introducing a salary cap following the fine and docked points punishment given to rugby union side Saracens for going over their wage limit. (Telegraph) 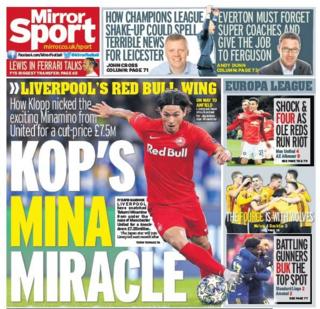