Everton have talked with agent Mino Raiola to see if former Sweden forward Zlatan Ibrahimovic, 38, would be open to a move to Goodison Park, although AC Milan remain favourites to sign the ex-Manchester United striker. (Arena Napoli, via Sport Witness)

Interim boss Duncan Ferguson, 47, does not want the Everton manager's job on a full-time basis, despite beating Chelsea 3-1 in his first game in charge. (Liverpool Echo)

Manchester City assistant coach Mikel Arteta would relish a return to his former club Arsenal to become their new manager - but wants assurances from the hierarchy. (Sun)

Arsenal and Everton are set to meet with former Chelsea boss Carlo Ancelotti, after his dismissal by Napoli on Tuesday night. (Evening Standard)

American billionaire Todd Boehly, a part-owner of the Los Angeles Dodgers, is considering making a fresh approach for Chelsea, despite the club's insistence that it is not for sale. (Telegraph)

Leicester City are moving closer to securing 23-year-old England midfielder James Maddison, who has been linked with Manchester United, to a new long-term deal. (Mirror)

Manchester United are showing the most interest in a transfer for Bayer Leverkusen's Germany playmaker Kai Havertz, 20. However, they will face competition from Barcelona, Liverpool, Real Madrid and Bayern Munich. (Bild, via Express)

Lampard could also make a move to bring Bournemouth centre-back Nathan Ake back to Chelsea, with the Blues having inserted a £40m buy-back clause in the 24-year-old Netherlands defender's deal when selling him to the Cherries in 2017. (Guardian)

Inter Milan and Atletico Madrid are among the clubs targeting Olivier Giroud, with the 33-year-old France forward ready to leave Chelsea in January. (Football.London)

West Ham will sack manager Manuel Pellegrini, 66, if the Hammers lose away at fellow strugglers Southampton on Saturday. (Sun)

Rangers face a battle to hold on to 17-year-old Scottish winger Kai Kennedy, with Bayern Munich and Manchester City among the clubs looking to sign him. (Daily Record)

A second game as interim boss for former Toffees striker

Newcastle United and Argentina defender Federico Fernandez, 30, wants to hold contract talks before the end of January, with his current deal expiring at the end of the season. (Northern Echo)

Leicester City and Belgium midfielder Dennis Praet, 25, has dismissed rumours he will make an immediate return to Italy after being linked with a move to Fiorentina. (Leicester Mercury)

England defender Fikayo Tomori, 21, is set to commit his future to Chelsea after a fine start to his first season in the Premier League. (Star)

Aston Villa are one of a number of clubs in contact with Besiktas over a potential move for Croatia defender Domagoj Vida, 30. (Turkish Football, via Birmingham Mail)

Mexican striker Raul Jimenez, 28, says he is happy at Wolves but has not ruled out a return to Spanish football in future. (Express and Star)

Burnley are after Derby County's 19-year-old right-back Jayden Bogle, a player who has represented England at Under-20 level. (The Athletic - subscription required) 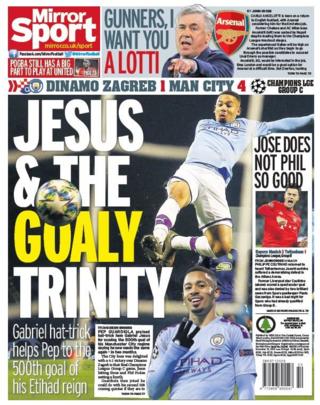 In the Daily Mirror, "Gunners, I want you Alotti"