Manchester City assistant manager Mikel Arteta will have to go through a lengthy interview process if he wants to become the next permanent Arsenal manager. (Sunday Telegraph)

Manchester City have first refusal on signing Jadon Sancho because of a clause they negotiated as part of the deal which saw them sell him to the German club. But the Premier League champions will not take up the option to match any offers for the winger. (Sunday Mirror)

Barcelona boss Ernesto Valverde has hinted that midfielder Arturo Vidal could move to Manchester United, with £13m on the table for the 32-year-old Chilean. (Sunday Mirror)

Former Bayern Munich boss Niko Kovac has denied he is in the running for the vacant manager's job at Everton, despite being at Goodison Park to watch the 3-1 win over Chelsea on Saturday. (Goal)

Was broadcaster's debut a success?

Manager Jose Mourinho wants to make Juventus and Turkey defender Merih Demiral his first signing at Tottenham, and has joined Arsenal and Manchester United in chasing the 21-year-old. (Sun)

Former Tottenham boss Mauricio Pochettino has not ruled out taking the vacant manager's job at Arsenal. (TYC Sports via Mail)

Chelsea are lining up a £40m offer for Bournemouth's Nathan Ake, 24, with the Blues keen to trigger a buy-back clause in their former defender's contract. (Telegraph)

Liverpool are interested in 20-year-old Fluminese striker Evanilson, who will be available on a free transfer in February. (Netflu via Sun)

Olympiacos defender Omar Elabdellaoui is a target for Aston Villa and Celtic. The 28-year-old Norway international says he has "decisions" to make. (Birmingham Live)

Former Leicester City manager Claude Puel says he "did not have a problem" with Jamie Vardy during his spell in charge, but the 32-year-old England striker sometimes "is like a child" and "needs attention". (Mail on Sunday)

Former Manchester United striker Carlos Tevez has revealed that his then team-mate Wayne Rooney gifted him a Lamborghini after the Argentina international was mocked by the squad for driving an Audi. (Mail on Sunday) 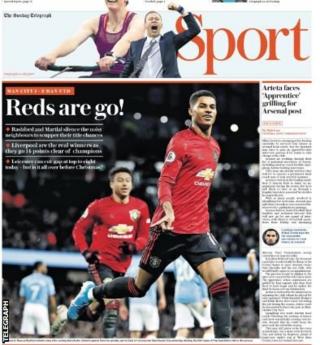 Read more on Williams knocked out by China's Wang