New Hearts manager Daniel Stendel endured a miserable start as St Johnstone hauled themselves off the bottom of the Scottish Premiership with victory at Tynecastle.

Hearts were devoid of creativity and drop a spot to 11th while remaining off the bottom on goal difference.

St Johnstone are up to 10th with a three-point gap on the bottom two.

The visitors were good value for their first away success in the Premiership in almost a year, with Michael O'Halloran, Hendry and David Wotherspoon all coming close.

Hearts now have just one victory in their last 11 league matches and Stendel has been left in little doubt about the size of the task facing him at Tynecastle.

Slick Saints pile on the pain

The more things change for Hearts, the more they stay the same. Hopes were high at Tynecastle of a bright new dawn under Stendel but the dark cloud of a relegation struggle continues to linger.

This performance was as poor as anything served up by predecessor Craig Levein and interim boss Austin MacPhee.

Former Barnsley manager Stendel wasted no time in putting his stamp on things - Irish forward Aidan Keena, 20, and 17-year-old full-back Aaron Hickey were among four changes to the starting line-up as the German looked to adds legs to carry out his gegenpressing gameplan.

It is a system that will clearly take some time to get up and running. And Stendel's decision to opt for a high defensive line was a bold one that almost backfired.

Bobby Zlamal does not always convince as a goalkeeper and was now being asked to be a sweeper too. The Czech was caught out when a simple ball caused him to rush out of his penalty area, where O'Halloran got there first and honed in on goal.

All he had to do his pick his spot either side of covering defender Hickey on the line, but instead shot straight at him and Kennedy could not convert the rebound as Zlamal scrambled back to save. 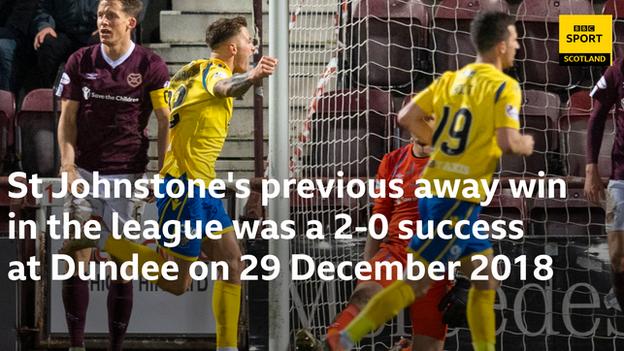 Hearts were dreadful as an attacking force. A Jamie Walker burst forward and drive deflected narrowly wide was the closest they came and the likes of Sean Clare and Steven MacLean were largely anonymous.

The hosts looked to get the ball forward quickly, but long passes rarely found their intended target and the half-time introduction of Ryo Meshino for Keena had little impact.

St Johnstone, sensing the hosts were there for the taking, grabbed the game by the scruff of the neck in the second half. Matty Kennedy ran from the halfway line and sent a shot wide before Hendry skewed a header off target from an Antony Ralston cross.

Hendry was scratching his head in disbelief when Zlamal denied him with a brilliant save from close range. But from the resultant corner, the 22-year-old powered home a header for his fourth goal of the season.

Hearts huffed and puffed in search of an equaliser that never looked likely. And substitute Wotherspoon came close to a second in injury time, curling inches beyond the far post as St Johnstone showed a cutting edge sorely lacking among Stendel's bunch.

Man of the match - Murray Davidson

St Johnstone were immense from start to finish. At the back Liam Gordon and Jason Kerr snuffed out the Hearts strikers, while up top the relentless running and chasing from Kennedy and Stevie May kept the home defence on their toes.

But best of all was veteran midfielder Murray Davidson. He was strong in the challenge and denied the opposition time to create opportunities that would have had his defence in trouble.

'We need the fans' help' - reaction

Hearts manager Daniel Stendel: "You can see the players wanted to try the new things but we did not deserve to win, we have not really created chances. I hope the fans give the players more chance to change the opinion, because we need help from the stands.

"We can play so much better than today. We have some big players injured and when they come back I hope we will have more quality to change things."

St Johnstone manager Tommy Wright: "It's been a long time coming but is fully deserved. I don't think our goalkeeper has had a save to make all day. We had the better chances and defended really well. I watched how Stendel got Barnsley to play and knew we'd get a lot of space in behind."