Arsenal have held their first interviews with candidates for their vacant manager's job, with the focus on candidates who are out of work. (Telegraph)

Shanghai SIPG coach Vitor Pereira is one of the leading contenders to replace the sacked Marco Silva at Everton. (Mail)

Ex-Juventus manager Massimiliano Allegri says he will not return to management until the summer but has been taking English lessons amid links with Premier League jobs. (ESPN)

'Everton's sacking of Silva a blow to Farhad Moshiri's credibility'

'Everton are turning into a badly scripted soap opera'

Manchester United are still hopeful of signing Tottenham midfielder Christian Eriksen, 27, in January after the Denmark international rejected them in the summer. (Mirror)

Prior to the win over Tottenham in midweek, Manchester United players told the club's hierarchy that they should not sack manager Ole Gunnar Solskjaer. (Times - subscription required)

Out-of-favour Chelsea striker Olivier Giroud, 33, is unlikely to leave the club in January with clubs preferring to wait until the French international is available in the summer on a free transfer. (Sun)

Borussia Dortmund are determined to keep England forward Jadon Sancho, 19, until the end of the season. (Telegraph)

The agent of France and Barcelona forward Ousmane Dembele, 22, has met with executives from both Chelsea and Manchester City. (El Desmarque - in Spanish)

West Ham will try to sell 33-year-old Spanish goalkeeper Roberto in January and part ways with the director of football who brought him to the club in the summer.(Guardian)

Barcelona's 17-year-old forward Ansu Fati has signed a new contract with a release clause that will rise to 400m euros (£337.5m) when he becomes a first-team player. (FC Barcelona) 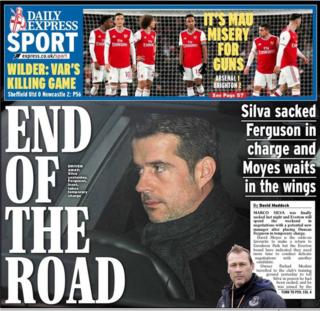 Read more on I will continue Bryant legacy - James