The Championship is a "bubble waiting to burst" because clubs are posting record losses in a "gamble" to reach the Premier League.

This follows the introduction of new profit and sustainability (P&S) rules by the English Football League in 2016-17.

The EFL told the BBC it has set up a "working group" of clubs to look at possible changes that could help the long-term sustainability of clubs in future.

'Thank God we're out' - what else did Sharpe say?

Sharpe said the "only reason" the Whelan family sold Wigan to the Hong Kong-based company International Entertainment Corporation was because they did not see the "scary" financial situation improving.

"The Championship is not financially sustainable, it's a bubble waiting to burst," he said.

"It can't continue if the model is just having enough billionaire owners to keep funding it - that's a strange, crazy model because there are only so many people you can attract."

Sharpe, who took over Wigan from grandfather Dave Whelan in 2015, said the family were putting in "nearly £1m a month just to keep it going" despite having the fourth-lowest wage bill in the Championship.

He said he "would not be surprised" if in the next five years a Championship club entered administration and dropped out of the Football League like Bury did in August.

"There are Championship clubs chasing that Premier League dream and when the gamble doesn't come off somebody has to foot the bill and if they can't afford it, the club could end up in administration," he said.

"It's a real problem and it's only going to get worse - thank God we are out."

What did the EFL say?

The EFL told the BBC: "Club owners are fully aware of the current financial regulations in place and are cognisant of the risks that such an increase in outgoings can have on sustainability.

"Clubs, however, must be given the freedom and flexibility to strive for success within the parameters of the regulations.

"It should also be remembered that 'operating profits' are not the primary aim of most professional clubs, with owners opting to compete for success in what is an increasingly competitive marketplace."

What are the new spending rules? 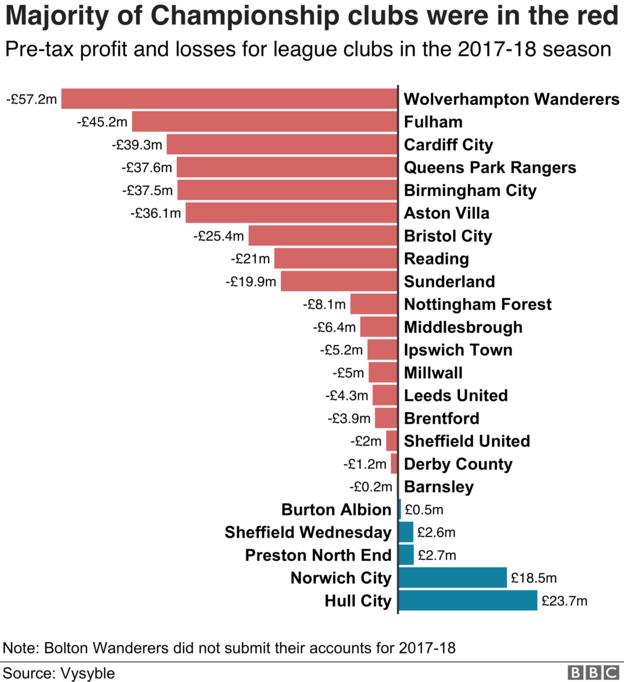 Figures come from published 2017-18 accounts of each club company or group structure.

New P&S rules introduced by the EFL from the 2016-17 season allow the majority of clubs £39m in losses over three seasons.

If a team has recently been relegated from the Premier League, its limits will be larger - and there are other caveats that allow some clubs to spend beyond the £39m limit.

Clubs that spend beyond their P&S limit can face sanctions, such as a transfer embargo or a points deduction, as happened to Birmingham City last season.

What about those with the highest losses?

5 Live's analysis found that the losses detailed on the public annual accounts for five Championship clubs were approaching or exceeding £39 million in 2017-18 alone.

The three clubs - Wolves, Fulham and Cardiff - to post the highest pre-tax losses all did gain promotion to the Premier League that year.

Fulham told the BBC that, despite posting losses of £45m in one year, they would not have broken the three-year P&S limit even if they had not been promoted.

QPR say their £38m loss is partly because of a £20m fine already imposed by the EFL under previous Financial Fair Play rules, and that this would not count towards the spending limit. Birmingham say since their points deduction they have worked to ensure compliance with all necessary regulations. Wolves and Cardiff provided no comment.

If a club does go up they receive promotion bonuses and their P&S limit is increased to more than £100m, meaning some sides are running up big losses over one or two years in a bid to make it up to the Premier League.

But if they don't achieve promotion, they will have to cut spending significantly in the third season - by possibly selling players or assets - to bring them under the £39m limit.

"You can lose £39m over three years in the Championship but it's clearly not stopping clubs - a points deduction is a slap on the wrist," said Sharpe.

The EFL said that it has "demonstrated that appropriate action will be taken in accordance with our regulations when breaches are identified".

It added: "But it is important to acknowledge that the majority of EFL clubs are well supported by experienced owners and their boards, who are very aware of the economic challenges faced when operating a football club."

What about stadium sales?

There have been questions raised about some clubs - including Aston Villa and Derby - and their ground sales. Both clubs deny breaching any P&S rules.

Sheffield Wednesday were charged with misconduct by the EFL last month, after an investigation into the sale of Hillsborough to the club's owner, which the EFL allege helped it meet P&S rules.

The Owls sold their ground to owner Dejphon Chansiri for £60m in June this year, allowing them to record a pre-tax profit of £2.6m for 2017-18, which allegedly helped the club meet P&S rules.

The EFL charge relates to "how and when" the stadium was sold and its early inclusion in the 2018 accounts. Sheffield Wednesday deny the charges, calling them "unlawful" and "stands ready, if necessary, to vigorously defend them".

The club, which is now bringing a claim against the EFL, says it has "numerous emails, letters and other documents in which the EFL gave authorisation to the transaction, and on which authorisation the club understood it could rely".

Lifelong Wednesday fan Chris McClure told BBC Radio 5 Live his club's situation "shines a light on a bigger problem" within the league and its finances, and he now feels "numb" going to watch his side, with their season in limbo as they await their fate.

"I love going to see Wednesday, but now the whole enjoyment has been zapped out of it before I even enter the ground," he added.

Are wages just too high? 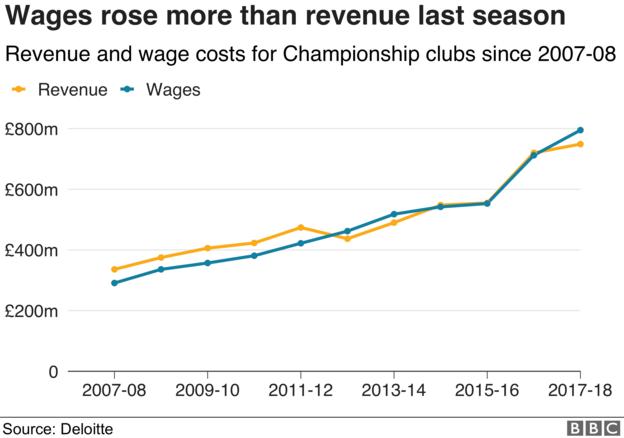 Vysyble says more than half of clubs are spending more on wages than they make in income.

Deloitte say this gap between wages and revenue is likely widen further to what they call an "unwelcome record high" when the 2018-19 accounts are published next year.

Sharpe, who is now an agent, says that "a salary cap is the only way to solve the problem".

He added: "People talk about a new TV deal but it will all just go back to the players ultimately and the clubs and owners that want to gamble will just give out higher wages.

"A salary cap will be hard to pass on a vote but if it doesn't, they have a big, big problem on their hands."

What about parachute payments?

Figures from Deloitte show that parachute payments, designed to help relegated clubs absorb big losses in revenue caused by dropping out of the top flight, are having a significant impact on the revenue inequality within the Championship.

The average club receiving parachute payments had a total revenue of £13m in 2001-02 against £10m for those without.

In 2017-18 those receiving parachute payments had a total revenue of £51m against £21m for those without.

The EFL said: "The Premier League does remain an important part of the financial mix across the EFL through the provision of parachute payments and contracted solidarity payments," adding that "this assists in providing clubs with increased clarity when making long-term financial commitments."