Manchester United could turn to England manager Gareth Southgate if they decide to sack Ole Gunnar Solskjaer at the end of the season. (Sun)

Chelsea are willing to break their transfer record in order to sign Borussia Dortmund and England forward Jadon Sancho, 19. (Goal)

Sancho, who joined Dortmund from Manchester City, has no intention of leaving the Bundesliga side in January. (Bild, via Mirror)

Chelsea will learn on Thursday whether their transfer ban, set to expire in February, will be repealed to allow them to do business in January. (Telegraph)

Former Arsenal midfielder Patrick Vieira, who is manager of French club Nice, is a leading candidate to become the new Gunners boss following the sacking of Unai Emery. (Nice-Matin, via Mail)

Manchester City are confident England forward Raheem Sterling, 24, will sign a new deal that will make him the club's highest-ever earner. (Metro)

Liverpool and Arsenal have joined Barcelona in the race for 17-year-old German striker Karim Adeyemi, who is on loan at Austrian second-tier side Liefering from RB Salzburg. (Sport via Mirror)

Who stuck Declan Rice's shoes to the floor?

Tottenham can sign Giovani lo Celso - on loan from Real Betis - on a permanent deal in January if they pay £27.3m for the 23-year-old Argentine midfielder. (ABC de Sevilla via Football London) 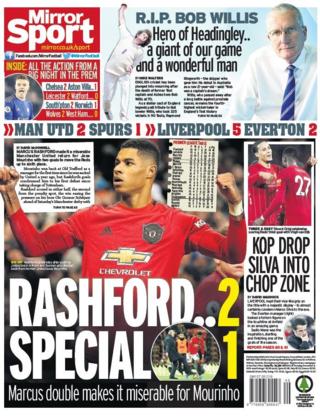