Manchester United boss Ole Gunnar Solskjaer has told his players he could be sacked depending on his side's results against Tottenham and Manchester City in their next two games. (Sun)

Former Manchester United and Sweden striker Zlatan Ibrahimovic, 38, is set to reject a return to the Premier League and agree a deal with another of his old clubs AC Milan. (Telegraph)

Tottenham's Denmark midfielder Christian Eriksen, 27, has made it clear he will not sign a new contract and will reject any attempts to persuade him to stay. (Telegraph)

Arsenal are ready to assess as many as 12 contenders for the managerial vacancy. (Mirror)

However, Arsenal will offer interim boss Freddie Ljungberg, 42, the job on a permanent basis if he instigates a sufficient turnaround in fortunes. (Evening Standard)

Arsenal and Everton, whose manager Marco Silva is under pressure after his side's struggle this season, are both interested in recruiting former Valencia coach Marcelino. (Mail)

Watford have held talks with former Athletic Bilbao boss Jose Angel Ziganda but it is understood he is no longer under consideration to succeed Quique Sanchez Flores. (Sky Sports)

Watford are considering making a stop-gap appointment to see them through to the end of the season. (Mail)

Everton are set to stick with Marco Silva as their manager before the derby match with Liverpool on Wednesday. (Express)

Newcastle United will only consider bids of more than £15m for English striker Dwight Gayle, with a number of Championship clubs interested in the 29-year-old. (Telegraph)

Veteran Neil Warnock, 71, could make a shock return to management at Middlesbrough, with Jonathan Woodgate facing the sack. (Sun)

Manuel Pellegrini has bought himself time as West Ham boss after his team's win at Chelsea. (Mail)

Former Tottenham boss Mauricio Pochettino has opened the door on an instant return to the Premier League, declaring himself ready to dive straight back into management. (Fox Sports, via Mirror)

Crystal Palace manager Roy Hodgson says he is counting on having Ivory Coast forward Wilfried Zaha, 27, at the club for the duration of his contract, which runs until 2023. (Sky Sports)

It's time for the midweek Premier League predictions

Roma are planning an improved offer to buy Manchester United and England defender Chris Smalling, with the 30-year-old currently on loan at the Serie A club. (Il Romanista, via Manchester Evening News)

Former Manchester United and West Ham striker Javier Hernandez, the 31-year-old Mexico international now with Sevilla, has hinted he is open to moving to the MLS. (Mail)

Golf fanatic Gareth Bale, 30, could be banned from the links during Wales' Euro 2020 campaign as Ryan Giggs bids to keep his star player fit. (Sky Sports)

Liverpool could bring forward plans to bid for 21-year-old Norway midfielder Sander Berge from Belgian club Genk and the Reds see him as cover for injured midfielder Fabinho. (Mirror)

Inter Milan are ready to offer Fiorentina money as well as two of their players for Italy international forward Federico Chiesa, 22, who has been linked with Liverpool. (Calciomercato)

Fulham have made an enquiry about signing Leicester's England Under-21 defender James Justin, 21, on loan in January. (Football Insider)

Turkish side Besiktas have been linked with a move for Aston Villa's French striker Jonathan Kodjia, 30. Besiktas are willing to pay £2.5m, but Villa want up to £7m. (Sporx, via Birmingham Mail)

Tottenham defender Jan Vertonghen, 32, believes Mauricio Pochettino was a victim of his own success at the club and says all the players feel responsible for the Argentine's sacking. (Evening Standard)

West Ham are looking to sign a goalkeeper, a midfielder and a striker in January. (Star)

Manager Gareth Southgate says England have a fantastic opportunity to rectify an "appalling" record at the European Championship next summer that has seen them reach only one semi-final in almost 60 years. (Guardian)

Former Watford striker Odion Ighalo, 30, is looking to return to the Premier League in January and move from Chinese club Shanghai Shenhua. Everton, West Ham, Crystal Palace, Newcastle and Southampton have all expressed an interest in the Nigerian, as have the Hornets. (Team Talk)

Nineteen-year-old Swedish midfielder Dejan Kulusevski, who plays for Parma on loan from fellow Italian side Atalanta, is wanted by Manchester United, Tottenham and Arsenal but has revealed he is a Chelsea supporter. (Team Talk)

x Manchester United boss Ole Gunnar Solskjaer has clamped down on the matchday dress of his players after they started wearing additional items to their club suit. (Times - subscription required) 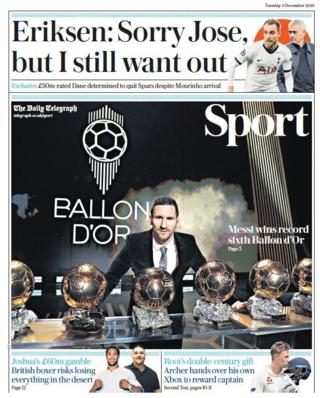 In the Daily Telegraph, "Eriksen, I still want out"

Read more on Saracens urged to be more transparent