If Freddie Ljungberg wants to be Arsenal manager for any length of time, he has to change what the Gunners do when they are not in possession.

It was bad enough watching their defensive display in Sunday's 2-2 draw at Norwich first time around but, when I went through the game again for our analysis on MOTD2, it was apparent just how poor they are at that part of the game.

Watching clip after clip of them in the cold light of day, it was almost astonishing how often Arsenal just retreat away from the ball.

That was what happened for Norwich's first goal, when David Luiz just backed off and backed off to give Teemu Pukki the chance to shoot, but there were a couple of warnings before then and it kept on happening afterwards as well.

It seemed that the Arsenal midfield players did not know when to press and the two centre-halves, Luiz and Shkodran Mustafi were dropping off and giving Pukki acres of space to run into.

'If you concede space, you don't win'

When the Gunners had the ball against Norwich, I actually thought there was an improvement from what we had seen under Unai Emery in recent weeks. They were controlling possession and passing the ball quickly.

Emery was sacked on Friday and club director Josh Kroenke says that Ljungberg was appointed interim manager because he "has Arsenal DNA" and that was evident in his first match in charge.

If you look at the characteristics of Arsene Wenger's Arsenal side that Freddie and I played in, then it seems that is the way he wants his team to play football too. In possession, they were certainly a lot better than they have been recently.

But if you concede space, and you don't compete for the ball or get close to the opposition players, then you don't win football matches.

That is what happened to Arsenal at Carrow Road. Yes, they showed some character to come from behind twice, but with better defending they would not have been in that position in the first place.

Freddie does not know how long he is going to be manager for - a week, a month, or longer - but his first task is to try to put that right. 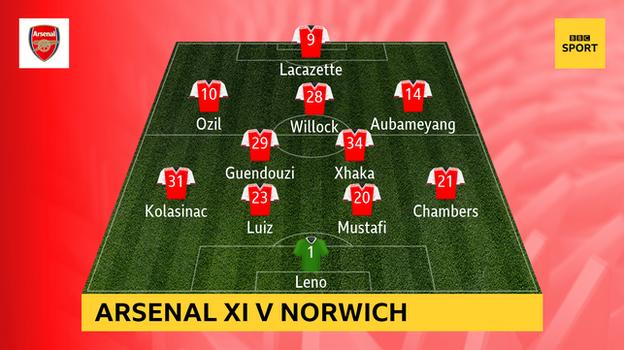 I am sure Freddie will aspire to the same key values we had in our team when we played together, when the discipline and organisation we had when we lost the ball played a big part in our success.

It is going to be hard for him to achieve those ideals with the squad he has got, and in what will probably be a limited timeframe, but he has got to try.

If it is going to happen, it is not just down to him - there is going to have to be a shift in mentality from the Arsenal players.

By that - and I am obviously speaking as an ex-defender here - I mean a realisation by the players of what is required when they are not in possession, and also a willingness to actually go and do it too.

I am talking about the timeframe between the moment you lose the ball, when you try to win it back, and what you do in the meantime.

If you cannot win it back immediately by competing with the person who took it off you, then you get back into position, and the team drops back into its shape.

These are the basics, really, but doing neither leaves you exposed, which is what has been happening too often to Arsenal for a long time now.

Freddie had little or no chance of changing that this week, of course. He only took charge on Friday.

There is no magic wand, and there is a reason a lot of what we have seen from Arsenal so far this season, we saw again on Sunday.

But he was a hardworking player himself, and he will have a chance to make a difference as a coach, to hopefully arrest the slide that his team are on.

The next few weeks will not be easy - Arsenal have got seven Premier League games in the next month, and I don't see an easy one at the moment.

He cannot be frightened by the fixtures, though. And while he cannot change his personnel either, he just has to rise to the challenge and go to do the work on the training pitch to try to make the existing team better.

What Arsenal need next - a winner

There has been lots of speculation about who Arsenal want as their next permanent manager but I am not really bothered specifically who that person is, more about the set of values and qualities that they will bring.

I want someone with charisma. A good communicator and a motivator, who can bring the right balance to their style of play.

Above all, though, Arsenal need a winner. Someone with a long-term vision for the club, and the ability to see that vision through.

So it is a bit concerning that there does not appear to be a clear plan in the type of manager that the board wants - you only have to look at the very different profiles of all the names being mentioned to see that.

That kind of fits in with the recent issues there have been in the boardroom, and the different directions people in different positions at the club seem to want to go in.

I am not sure who will decide who the next manager is, but hopefully part of the interview process will be to ask any candidates what sort of changes they would make to the team.

That should make it an easy interview for most managers, because it is quite obvious - strengthen the centre of defence and midfield and Arsenal can be a real force in the Premier League.