Only 18 days separated Arsenal saying Unai Emery was "the right man for the job" before they decided to sack him.

At that point, the Gunners were five games without a win, which has since extended to seven - their worst run of results in 27 years.

But it has been the manner of performances under the Spanish manager which have also proved costly as they slipped behind Wolves, Sheffield United and Burnley to sit eighth in the Premier League table.

"No tactics, no formation, nowhere to hide" read the banners held up at Emirates Stadium during Arsenal's 2-1 defeat by Eintracht Frankfurt on Thursday.

Emery's overall win percentage at the club (55%) is helped by a 70% win record in the Europa League, putting him third in the list of all managers to have taken charge of more than 20 games at Arsenal.

But when you dig into the numbers, it underlines why so many Arsenal fans felt it was time for a change. 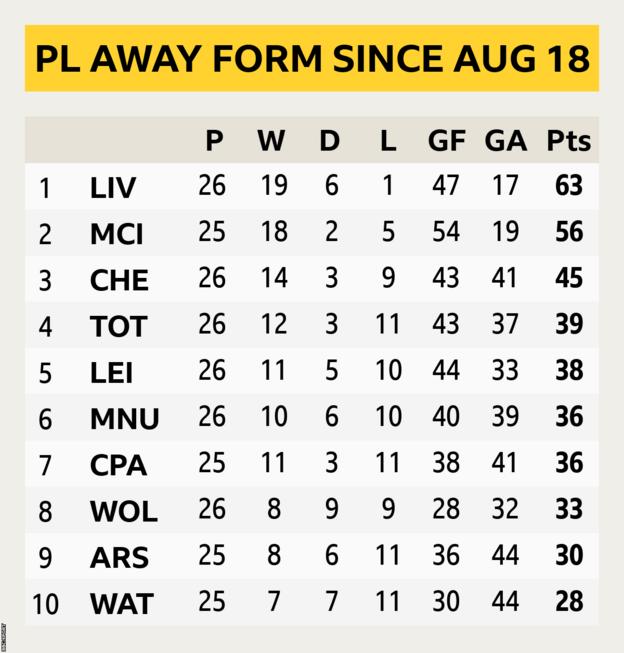 Problems away from home

Although there have been flashpoints at the Emirates in recent weeks - Granit Xhaka's reaction to being booed the most eye-catching - Emery's home record has actually been decent.

Only Premier League leaders Liverpool (71) and champions Manchester City (70) have accrued more points since the start of the last season than Emery's Arsenal (58).

Away from home in the same time period, however, eight teams have a better record, including Wolves and Crystal Palace.

The Gunners' 30 points from 25 away games are less than half what Liverpool have achieved (63), and nine points worse off than north London rivals Tottenham.

Arsenal have also only kept two clean sheets on the road in that time, pointing to a wider malaise at the back.

Their most recent example of defensive solidity on the road came on the first day of the season when they beat Newcastle 1-0. It was also their last league away win too.

A leaky defence, punished too easily

Former Arsenal boss George Graham, who was in charge when '1-0 to the Arsenal' was a familiar chant and common result, must have been having kittens about Arsenal's defence this season.

His former stalwarts in that famed Gunners defence haven't exactly been slow to criticise either.

Former right-back Lee Dixon called the 2-2 draw at Watford on 15 September: "The worst performance without the ball for a very long time." Former centre-back Martin Keown labelled Thursday's defeat by Frankfurt a "shambles".

Arsenal have conceded 70 Premier League goals under Emery, more than any other 'big six' club since the start of last season.

More alarmingly in the same period, they have dropped 19 points from winning positions and have made 15 errors leading to goals - more than any other top-flight team.

The top teams, seemingly, have been quick to take advantage. Arsenal have only won three of 17 games against the other five teams in the traditional top six.

Gunners supporters will be thankful for strikers Pierre-Emerick Aubameyang and Alexandre Lacazette, who have scored 42% of Arsenal's goals under Emery.

In truth, though, they were masking the problems.

At a time when the team appear to have been screaming out for leaders - Keown said Emery "seems to have lost the players" - there have to be questions about Emery's decision to appoint a captain by committee and fielding nine different skippers.

Previous skipper Laurent Koscielny left in the summer, and choosing Xhaka seemed flawed after he was stripped of the armband following a fall-out with supporters. Man-management issues also surfaced over a sparingly-used Mesut Ozil.

Reports of confusing tactics and players mocking Emery's accent underline that the glow of a new boss has faded.

After two defeats in his opening two games last term, Emery's side went on an unbeaten run of 22 games, lasting until December.

In 13 Premier League games this season, they are seven points worse off.

Replacing Wenger was always going to be difficult given the Frenchman won 10 major trophies, including two Premier League and FA Cup doubles.

He had his critics, especially towards the end, but at least fans and players knew what he represented.

The only crumb of comfort for Gunners fans might be that after Manchester United replaced their own managerial colossus in Sir Alex Ferguson, David Moyes only lasted 10 months at the helm.

Emery outlasted the Scot by eight months, and at least the Gunners are still a point above United and rivals Tottenham in the table this season.

It may yet prove a foundation which temporary boss Freddie Ljungberg and the next manager, whoever that is, can build on.