A Premier League winner in search of more silverware, a historic game with a history of clashes and a chance for a European coach to make history.

This Saturday all your South American football dreams come true thanks to BBC Two and the iPlayer bringing you live coverage of this season's Copa Libertadores final.

Flamengo of Brazil face holders River Plate from Argentina in what is essentially the Champions League final for South America.

Forty-seven teams who play their football in Argentina, Bolivia, Brazil, Chile, Colombia, Ecuador, Paraguay, Peru, Uruguay and Venezuela battled it out between January and November to make the final of the most prestigious club competition in South America.

River Plate, heavyweights of Argentine football, overcame fierce rivals Boca Juniors in the semi-final to defend their crown at the Estadio Monumental in Peru's capital city of Lima. Waiting for them are Brazilian side Flamengo, who boast two of the competition's top scorers in Gabriel Barbosa and Bruno Henrique.

It's the first time since 1988 that the tournament will be decided in a one-off game and in a neutral venue as the organisers look to market the competition to a global audience.

This final has been moved to Lima from Chile over safety concerns, and you may recall that last year's final was also moved. A little bit further - 6,000 miles from Buenos Aires, in Argentina, to the Spanish capital Madrid.

The second leg was moved after Boca players suffered cuts from broken windows when their team bus was attacked by River fans and were also affected by the tear gas used by police to disperse the crowds.

In the match, Juan Quintero's stunning extra-time strike helped River Plate come from a goal down to record a historic victory over 10-man Boca in the second leg in Spain. It was River's fourth title and second in four years.

So who are the favourites?

A win on Saturday and River would become the first team to win the trophy twice in a row since rivals Boca in 2001.

Flamengo, meanwhile, have won the trophy once, back in 1981 when Brazil legend Zico fired them to glory.

Already champions-elect of Brazil's Serie A, they could become the first team to complete a league and Libertadores double since Pele's Santos in 1963.

Former Benfica boss Jesus, 65, would also be the first foreign coach to lead a Brazilian side to the Libertadores.

They could well do.

The winner of the Copa Libertadores final will qualify for the 2019 Fifa Club World Cup in Qatar, a competition that Uefa Champions League winners Liverpool have already qualified for.

Liverpool play their semi-final on 18 December with either River or Flamengo playing the previous day. Should they both win they will meet in the final on 21 December.

Any players I know?

River Plate have a few players who played at the last World Cup such as Argentina goalkeeper Franco Armani and midfielder Enzo Perez, but no major household names - in the UK, anyway.

Midfielder Bruno Zucolini was on the books at Manchester City but didn't play in the Premier League and joined Middlesbrough on loan, while forward Ignacio Scocco had six goalless months with Sunderland under Gus Poyet.

Flamengo also have a former Manchester City player who didn't play for the club - defender Pablo Mari - but do possess a Premier League winner in former Atletico Madrid and Chelsea left-back Filipe Luis.

Right-back Rafinha will be familiar to millions after eight years and 18 trophies with Bayern Munich and forward Barbosa - known simply as Gabigol - may have flopped at Inter but is absolutely lethal in Brazil.

What about Dad's Army?! 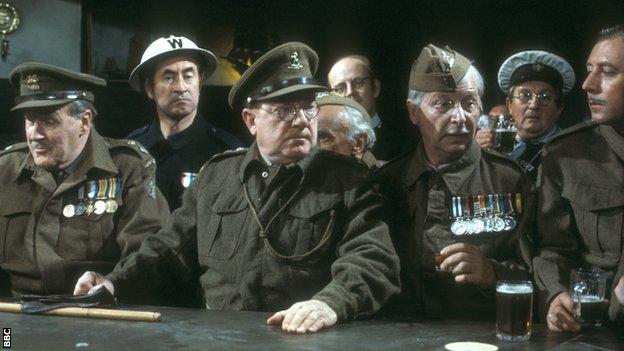 For one week only Saturday night is sitcom-less it appears...