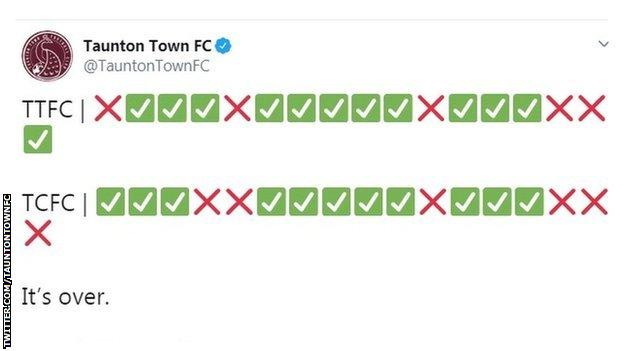 A non-league cup match has equalled the record for the longest penalty shootout in English football.

Taunton Town and Truro City needed 34 spot-kicks to separate them after drawing 2-2 in the Southern League Challenge Cup second round.

They equalled the record set in an EFL Trophy match between Chelsea's under-23 side and Oxford United in 2016.

Taunton finally won the shootout 12-11 when Jack Rice netted their 17th penalty to send his side through.

The two sides finished 3-3 after the regulation first five penalties, and both scored with their next five in sudden death.

Each team missed their 11th penalty and scored from the next three before appearing to lose their nerve.

Both missed kicks 15 and 16 and Truro's Austen Booth also missed his side's 17th to allow Rice to finally settle the tie with the fifth opportunity his side had to wrap up the shootout.

"Thirty-four minutes, 34 penalties and then I had to rebuild the penalty spot afterwards. It was mad," Taunton chairman Kevin Sturmey, who doubles up as head groundsman, told BBC Somerset.

"We had two opportunities to win it on penalties 32 and 33 and missed them both; one would have been signalled a wide in cricket."

The 34 kicks might equal the English record, but it's small fry compared to the longest shootout anywhere.

The world record at a professional level was established in 2005 when a Namibian Cup tie was settled after 48 spot-kicks.

In that game, KK Palace held their nerve to defeat the Civics 17-16 following a 2-2 draw.

Taunton do not have a game on Saturday, having previously been knocked out of the FA Trophy.

Their next fixture is a friendly with Bideford on Tuesday and a relieved Sturmey added: "There's definitely not going to be a penalty shootout."