New Tottenham manager Jose Mourinho will try to sign former Spurs forward Gareth Bale, 30, from Real Madrid, having wanted to sign the Welshman when he was at Manchester United. (AS - in Spanish)

Barcelona and Bayern Munich are ready to make a move for Pochettino. (Sun)

Pochettino was forced to leave a note to say goodbye to the Spurs squad, rather than wish his players well in person. (Sun)

Mourinho has told Spurs chairman Daniel Levy that England striker Harry Kane, 26, must not be allowed to leave. (Mail)

Gabon striker Pierre-Emerick Aubameyang, 30, has still not renewed his contract with Arsenal because he is waiting on Barcelona. (Mirror)

Real Madrid have backed Bale and ruled out a January exit for the player, despite him posing in front of a flag that said 'Wales. Golf. Madrid. In that order' while on international duty. (Marca)

Juventus will try to convince France forward Kylian Mbappe, 20, to snub interest from Real Madrid and join the Serie A club from Paris St-Germain. (Tuttosport, via Sky Sports)

Aston Villa want to sign a forward in January, are monitoring targets in Italy, Spain and France, and have been linked with Rangers and Colombia striker Alfredo Morelos, 23. (The Athletic, via Birmingham Mail)

Everton will have the chance to sign AC Milan and Poland striker Krzysztof Piatek, 24, in a swap deal that would see Toffees' Italian forward Moise Kean, 19, go to Milan. (Sport Witness)

'It will be pure theatre'

Which Jose Mourinho will Tottenham get and is he the right man for them?

Arsenal scouts are watching Hungary and Red Bull Salzburg midfielder Dominik Szoboszlai, 19. The Gunners see him as a potential replacement for Swiss midfielder Granit Xhaka, 27, who was stripped of the Gunners captaincy after reacting angrily to fans. (Football Insider)

Manchester City, Everton and Bayern Munich are trying to sign 21-year-old Hoffenheim midfielder Dennis Geiger, a player who has represented Germany at Under-21 level. (Sport 1, via Manchester Evening News)

Real Madrid and Barcelona are both keen on signing Slovakia defender Milan Skriniar, 24, from Inter Milan. Manchester City previously had a bid of 55m euros (£46.7m) rejected for the player who could now cost 100m euros (£85m). (AS)

Newcastle, Leicester and Celtic have been scouting 20-year-old winger Stephane Diarra, who plays for French Ligue 2 side Le Mans. Diarra was born in the Ivory Coast but also holds French citizenship. (L'Equipe, via Newcastle Chronicle)

Chelsea have joined Liverpool and Napoli in being interested in 21-year-old Genk and Norway midfielder Sander Berge. (Goal)

Everton are set to hold off on signing a centre-back in January even though major shareholder Farhad Moshiri is willing to finance a major signing. (Football Insider)

Arsenal boss Unai Emery is the betting favourite to be the next Premier League manager to lose his job. (Mirror)

Amazon Prime had behind-the-scenes access to Mauricio Pochettino's final days at Tottenham and the hiring of Jose Mourinho as part of their fly-on-the-wall series with Spurs this season. (Mail)

Spurs left Pochettino furious by installing Amazon cameras in his office - days after refusing his request to buy some himself for training purposes. (Sun) 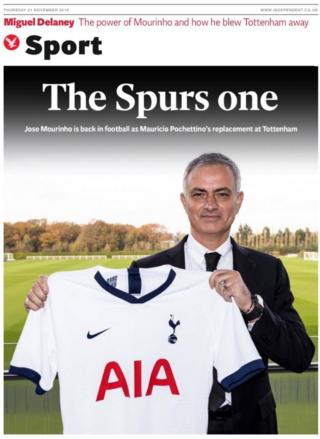 The sports section of the Independent