Eight domestic league titles, eight domestic cups and four major European trophies - you don't have to dig too deep into Jose Mourinho's track record to see why Tottenham have appointed him as their manager.

Between the sun setting on Tuesday night and rising again on Wednesday morning, Spurs ended Mauricio Pochettino's popular reign and replaced him with the former Chelsea and Manchester United boss.

A decisive move, a divisive decision. The Portuguese is a serial winner of trophies - something Spurs have been sorely lacking - but he also somewhat blotted his copybook with a troubled reign at United, which included accusations of dull, pragmatic football and clashes with players.

So have Tottenham appointed the 'Special One' or yesterday's man? BBC Sport looks through the numbers of his career so far.

For a club without a league title since 1961 and whose last trophy was the 2008 League Cup, Tottenham's move for Mourinho is understandable.

Pochettino did some wonderful things during his four and a half years, but a trophy eluded him - Spurs lost the 2015 League Cup final to Chelsea and were beaten by Liverpool in last season's Champions League showpiece, and they finished second in the Premier League in 2017.

This is Mourinho's eighth club in four countries, and he has won league titles in all of those - twice in Portugal and Italy and three times in England.

The 56-year-old has won the main domestic cup competition in all four of the countries in which he has managed and three League Cups in England.

He is also the only manager to have won both the Champions League and the Uefa Cup/Europa League more than once - winning both with Porto, the former with Inter and the latter with Manchester United.

As it stands, he is beating his new club 20-17 on major trophies won.

In 14 completed seasons as a manager, Mourinho has only finished outside the top three of the league in which he is managing once. The only time he has left a club in a position lower than sixth was when Chelsea sacked him in 2016 with the side 16th.

Across his career, his win percentage is a superb 64.8%, and he has picked up a stellar 2.15 points per game on average.

In the Premier League, he has won 61.9% of his matches. Only four managers to have taken charge of 50 or more games in the competition can better his 2.10 points per game - Manchester City boss Pep Guardiola (2.39), former United manager Sir Alex Ferguson (2.16), ex-Chelsea boss Antonio Conte (2.14) and Jurgen Klopp of Liverpool (2.12). 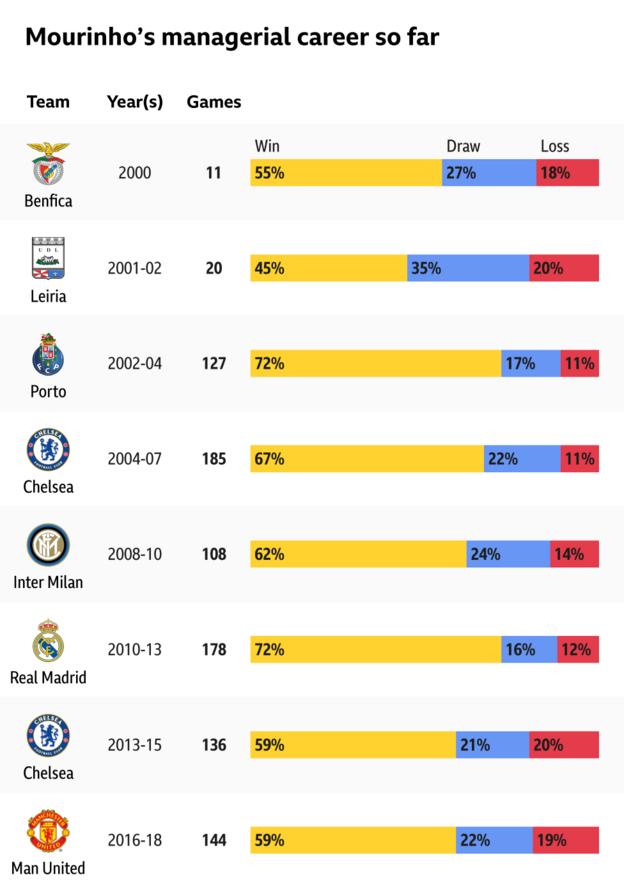 Mourinho was a breath of fresh air when he swaggered into his first news conference at Chelsea in 2004 and proclaimed himself the 'Special One'. But is that still the case?

Fifteen years on, his critics claim he is no longer the same force, his own brand of once-potent pragmatism no longer as effective in a world of attacking intent and high pressing.

He won two trophies in two full seasons at Manchester United and once famously claimed that finishing second in the Premier League in 2018 - 19 points behind champions Manchester City - was his greatest managerial achievement, largely because of a number of factors he felt were working against him.

But his overall record at Old Trafford presents a decline on his previous managerial positions. His win percentage (53.8%) and points-per-game ratio (1.89) at United in the league were the lowest of his managerial career since his brief spell at Leiria in the Portuguese Liga between July 2001 and January 2002.

Interestingly, though, that points-per-game number was exactly the same as that achieved by Pochettino during the same period at Tottenham.

Mourinho's United form continues a downward trajectory that began during his second spell at Chelsea. Since leaving Real Madrid in the summer of 2013, Mourinho has won 58.6% of competitive games and 56.8% of league matches. From the start of his managerial career at Benfica to the end of his spell at Madrid, he had won 67.6% of competitive fixtures and 70.8% of league games.

While it is impressive that Mourinho remains the fastest manager to reach both 50 and 100 wins in Premier League history, these landmarks have also now become a stick with which to beat him. Comparatively, his 50th win with United came in his 92nd game.

His overall haul of 176 Premier League points with United was fewer than four other teams during his time at Old Trafford, including Tottenham.

Notably, his side scored fewer goals than all of their main rivals during this time - their tally of 151 a massive 83 goals below that scored by leading side Manchester City.

In appointing "one of the most successful managers in football" who "has won honours at every club he has coached", Tottenham chairman Daniel Levy clearly sees Mourinho's time at United as an exception as opposed to part of a broader decline.

With Spurs having tailed off badly last season - 14th in the Premier League at the moment, having taken a dire 25 points from their past 24 games - something had to change.

Encouragingly for them, Mourinho has a habit of starting strongly with clubs.

He won 11 of his first 16 league games to win the Portuguese title in his debut season with Porto, lost just once en route to guiding Chelsea to the Premier League title in his first campaign in England, suffered only four defeats in his victorious first Serie A campaign with Inter, and failed to win only nine of 38 matches in his maiden La Liga season at Real Madrid.

In the very short-term, Mourinho's first opponent as Spurs boss is West Ham United this Saturday (12:30 GMT kick-off). He has beaten them 11 times before - the third most victories he has achieved against a club.

The side he has beaten the most in his career, having done so 13 times? That would be Tottenham.

If you can't beat them, appoint them.