Arsenal manager Unai Emery has been given a month to save his job. (Sun)

Barcelona have rejected an offer from a Premier League club for Croatia midfielder Ivan Rakitic of around £13m, £17m short of their valuation of the former Sevilla player, 31. (Sport)

Arsenal will offer Switzerland midfielder Granit Xhaka, 27, to Borussia Monchengladbach as part of a deal that would see them ask for first refusal on signing 22-year-old midfielder Denis Zakaria, who is also Swiss. (Mirror)

Manchester United could try to sign Norway striker Erling Braut Haaland, 19, from Red Bull Salzburg in January and loan him back to the Austrian club for the rest of the season. (ESPN)

Real Madrid and Barcelona could vie for Inter Milan's Slovakia defender Milan Skriniar, 24, who has also been a target for Manchester United. (Corriere dello Sport)

Manchester United are set for talks with Tahith Chong's representatives as they bid to thwart interest in the 19-year-old Dutch midfielder from Juventus. (Metro)

Who needs to do what in Euro 2020 qualifying finale

Abidal has backed coach Ernesto Valverde and denied the Catalan club are looking for a replacement. (Sport)

Barcelona considered their former player Thierry Henry, who has since taken charge at Montreal Impact, had Valverde not signed a new deal. (Mundo Deportivo)

Chelsea's Belgium striker Michy Batshuayi, 26, wants to stay and fight for his place rather than leave in January. (Sun)

Genk and Norway midfielder Sander Berge, 21, who has been linked with Liverpool and Napoli, admits he wants to play at Anfield "as much as possible". (Mirror)

Former Liverpool keeper Simon Mignolet, 31, said he joined Bruges as he felt he did not have the chance to battle Brazil's Alisson for the number one spot at the Anfield club. (Het Belang van Limburg, via Sport Witness)

Real Madrid's ex-Chelsea playmaker Eden Hazard believes his former club are only two or three players away from beating Liverpool to the Premier League title. (Star)

Former Tottenham striker Clive Allen, who had a spell as a kicker in American football, believes current Spurs forward Harry Kane, 26, will one day move into the sport. (Star) 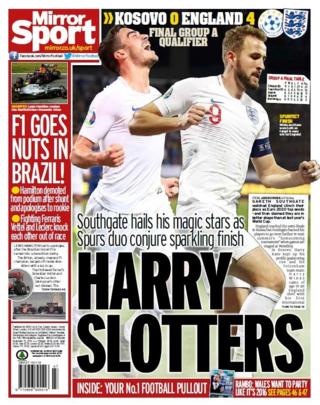 In the Daily Mirror, "Harry slotters"