Scotland are a top striker away from being a "major threat", believes former national team manager Craig Brown.

Brown, 79, the last man to lead Scotland to a major championships - the 1998 World Cup - is confident Scotland will reach the Euro 2020 finals through the play-offs in March.

And he says Steve Clarke just needs to find a forward who can regularly find the net to complete his side.

"What we really need is an out-and-out striker," Brown told BBC Scotland.

Hearts' Steven Naismith started up front in Saturday's 2-1 win over Cyprus in Nicosia as Scotland moved up to third in qualifying Group I.

He was replaced on the hour by Sheffield United's Oli McBurnie, while Dundee United's Lawrence Shankland was a contender to face Kazakhstan on Tuesday after scoring in the 6-0 win over San Marino last month but has now pulled out injured to be replaced by Kilmarnock's Eamonn Brophy.

Over the last 12 months, the quartet have scored only one goal for Scotland between them while Celtic's Leigh Griffiths has not played for the national team since September 2018.

"Maybe if Leigh Griffiths was fit and playing like he did against England a few years ago, we would have that striker.

"If we had that striker, I think we would have a major threat because we're getting goals from midfield and that's a good sign."

Scotland are a long way behind already-qualified Belgium and Russia in Group I, but will find out on Friday who they will face in March's play-offs after topping their Nations League section.

"I was heartened, I thought it was a good performance," Brown said of the win in Cyprus. "Cyprus are no soft touch, I think it's a very good result."

Scotland 'lucky to have McGinn' 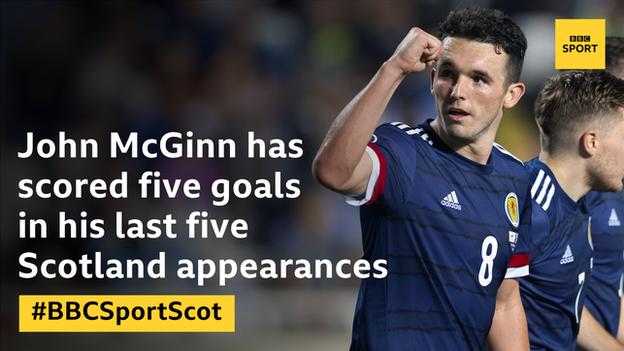 "He's got great enthusiasm, great energy, good ability," he said. "He's brave, he's everything you want in a midfield player.

"You want a guy in there who will win the ball, you also want one who will pass the ball. And he can support the front and score a goal.

"If you're looking for the ideal midfield player, he is the identikit picture of a top-class midfielder and we're lucky we've got a guy like that."