Manchester United are closing in on signing Real Madrid and Wales forward Gareth Bale, 30, in the January transfer window - and will allow France midfielder Paul Pogba, 26, to move in the opposite direction as part of the deal. (Sun on Sunday)

Manchester United are monitoring West Bromwich Albion's 23-year-old Brazilian winger Matheus Pereira, who is on loan at The Hawthorns club from Sporting Lisbon.(Mirror)

Anticipation and excitement in Kosovo for England arrival...

Arsenal are preparing a bid for Turkey defender Merih Demiral, who could be sold by Juventus if the right offer is received for the 21-year-old. (Tuttosport - in Italian)

Former LA Galaxy and Manchester United striker Zlatan Ibrahimovic, 38, is demanding almost £900,000 a month to return to Serie A, where he has played for Juventus, Inter Milan and AC Milan. Milan, Bologna and Napoli are among the clubs interested in signing the ex-Sweden international. (Mail on Sunday)

Roma will have to pay Manchester United £18m if they want to keep England defender Chris Smalling, 29, on a permanent basis. (Tuttosport, via Metro)

Inter Milan and Belgium striker Romelu Lukaku, 26, claims Manchester United boss Ole Gunnar Solskjaer wanted him to stay at Old Trafford prior to his £73m move to the Italian club. (Mail on Sunday) 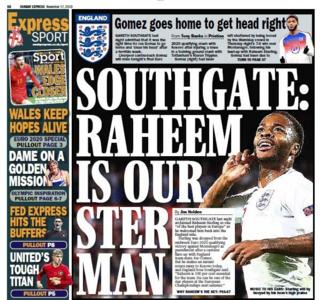 In the Sunday Express, "Raheem is our Ster man"