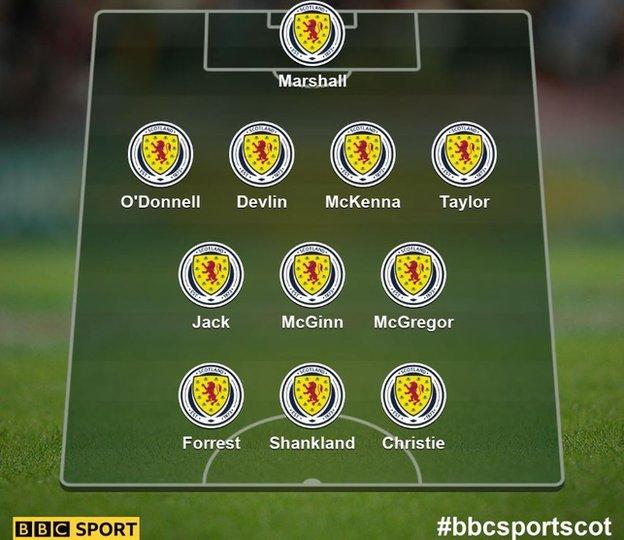 A return to the centre of defence for fit-again Scott McKenna is the most popular wish among Scotland fans for the Euro 2020 qualifier in Cyprus.

The Aberdeen defender received the most votes in our squad selector ahead of Saturday's game in Nicosia, just ahead of Celtic winger James Forrest.

Wigan Athletic's David Marshall, in third, is your preference in goal.

Sunderland's Jon McLaughlin had been handed his second cap in the 6-0 win over San Marino.

Having scored in his first Scotland start in that game, Lawrence Shankland received more votes than the other candidates for what is likely to be a lone striking role in Cyprus.

Despite the 24-year-old playing in Scotland's second tier, you backed the Dundee United striker ahead of giving fit-again Hearts veteran Steven Naismith his 50th cap from the start.

Celtic duo Ryan Christie and Callum McGregor are your next most popular midfielders after McGinn, with Rangers' Ryan Jack also slipping into a team you would prefer to play in a 4-3-3 formation.

Despite having only played once for Celtic since his August transfer from Kilmarnock, Greg Taylor is your clear choice to play at left-back in the absence of captain Andrew Robertson and Kieran Tierney.

You would also like to see Kilmarnock's Stephen O'Donnell replace Sheffield Wednesday's Liam Palmer at right-back in a side showing five changes from last time out at Hampden.

Meanwhile, Michael Devlin is backed ahead of Motherwell's Declan Gallagher to continue in central defence and form a partnership with club-mate McKenna.