Leigh Griffiths made his return for Celtic as they beat Livingston for the first time in four attempts to move clear at the top of the Scottish Premiership.

The Scotland striker played the final 22 minutes, three months on from his last first-team appearance.

Livi have not won in six games.

And Gary Holt's side, who inflicted Celtic's only league defeat of the season last month, have lost their last three.

In contrast, since that 2-0 defeat at the Tony Macaroni Arena, Celtic have responded with six league wins from six by an aggregate score of 18-0.

Since Livingston's win over Celtic in October, the fortunes of both clubs could not be more different.

Celtic have been relentless. Wins at home and away over Lazio, six goals past Ross County, five against Hibernian at Hampden, four up at Pittodrie against Aberdeen.

But for Gary Holt's Livingston side, they have played six, lost four, drawn two.

For 45 minutes they defended well. Celtic were inventive, sharp, and played with the confidence that comes from the sort of run they are on, but Livi repelled them time and again. But one slip gave Celtic their breakthrough.

Ricki Lamie should have cut out a pass through the Livi defence. Instead he was left in Edouard's wake as the Frenchman strolled into the box and chipped the ball over Matija Sarkic.

Home captain Brown doubled the lead when he was given too much room on the edge of the box and his shot deflected off a Livi defender and in.

The game had an inevitability about it after that. When Celtic are at home and motoring, with plenty of time left on the clock, they tend to keep on coming at the visitors.

The impressive Jeremie Frimpong scampered clear down the right side and rocketed a shot at Sarkic. It was saved, but it spun towards Forrest who volleyed it inside the near post.

Griffiths entered the fray after three months on the sidelines. He had three real opportunities, no better than when he had the goal at his mercy when he met a low cross on his own, but he somehow nudged it wide of the post.

Forrest skipped through to score his fourth after Ryan Christie pick-pocketed the Livi midfield and sent him clear.

That moved Celtic clear of Steven Gerrard's Rangers, who will attempt to close the three-point gap away to Hamilton on Sunday. 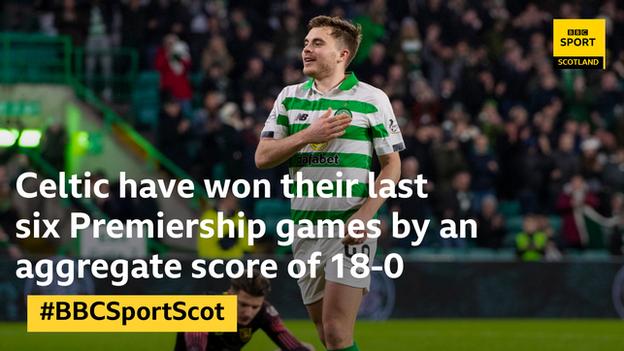 Man of the match - Jeremie Frimpong

Frimpong is quickly becoming a fan favourite at Celtic Park. The entertaining full-back, who plays more like a right winger, caught the eye once more with a thrilling performance.

He was aided by Christie who started wide right, drifting inside and creating the space for Frimpong to operate in an advanced area where he became a supply merchant for team-mates in central areas.

Brown had another commanding performance in midfield and topped it off with a goal, but the 18-year-old Frimpong was the stand out.

Celtic manager Neil Lennon: "I'm thrilled with that [performance] today and it was a lot better than I could've expected.

"It's a really comprehensive win, off the back of a two-week break. I can't ask any more of the players: they look fit, powerful and playing with real intent."

Livingston head coach Gary Holt: "Celtic are a world class team, they really are, and they've got a lot of pace and movement. But we nullified them at times. The goals are horrible. There's not one you can say is a great bit of play.

"It's wee individual mistakes we need to look at and we need to eradicate."

Shots on Target
Home12
Away1