Arsenal's Spain midfielder Dani Ceballos, 23, will refuse a return to Real Madrid while Zinedine Zidane is manager. (Sun via AS)

Manchester United are ready to bring forward a formal approach for Red Bull Salzburg's Erling Braut Haaland, 19, after seeing the Norway striker's value rocket during the first half of the season. (ESPN)

How does VAR work in Europe?

A look at how the technology is used in Germany, Spain, Italy and France

Manchester United are open to loaning Haaland back to Red Bull Salzburg providing they can get a deal done for the striker in January. (Mirror)

But it is believed either Real Madrid or Barcelona remain Haaland's preferred destination. (Mirror)

West Brom fear they may have to sell full-back Nathan Ferguson in January to avoid losing him for minimal compensation when his contract expires next summer. The 19-year-old has been linked with Tottenham and Crystal Palace. (Mail)

The father of Everton's Italian striker Moise Kean, 19, wants his son to quit Goodison Park and return to Italy. (Sun)

Chelsea have been linked with a summer move for Napoli's 25-year-old right-back Elseid Hysaj, whose contract expires at the end of the season. (Goal via Radio Punto Nuovo)

Tottenham's France goalkeeper Hugo Lloris, 32, has revealed he could return to action as early as January as he continues his recovery from a dislocated elbow. (Sun)

Tottenham have opened contract talks with Republic of Ireland forward Troy Parrott, who only signed a deal on his 17th birthday in February. (Football Insider)

Former Manchester United goalkeeper Edwin van der Sar has ended speculation he could return to Old Trafford as director of football by signing a new deal with Ajax. (Mirror) 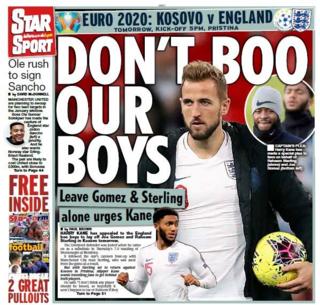 In the Daily Star, "Ole rush to sign Sancho"

Read more on Watch: Match of the Day 2