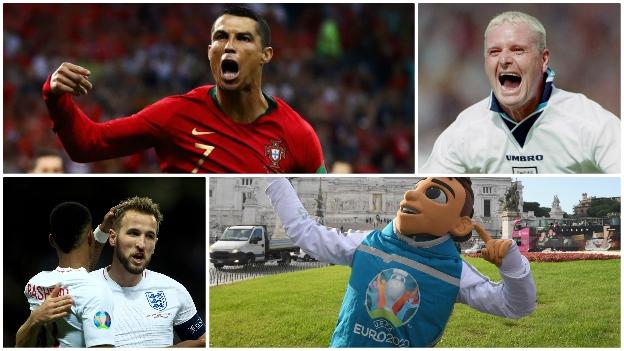 A Euro for Europe - that's how Uefa billed next year's European Championship given it is spread across the continent for the first time in history.

We now know 20 of the 24 teams who will feature at Euro 2020 after the groups came to an end on Tuesday. All that remains are the play-off games in March next year.

With 12 different host nations, an unprecedented demand for tickets and some of Europe's top teams and star players going into the tournament in top form, it promises to be a memorable event.

Here, BBC Sport takes a look at some of the reasons to get excited about it.

Fans lapping up the 12-nation format

This is, officially, the tournament that more people than ever before want to be a part of.

Delving further into the numbers, according to Uefa there were 1.9 million tickets requested for the final of Euro 2020 at Wembley - 22 times the capacity of the stadium.

The figures suggest people are also embracing the fact the tournament is taking place in multiple cities, with each fan applying for 14 tickets for games over at least two venues.

There's always a party atmosphere in the country where a European Championship or World Cup is being held, with football fans from all over the world mingling and generally having a good time.

The new format for this year's competition means that 'festival of football' feeling will be spread across 12 countries.

But for England fans there is the added bonus that Wembley will host more games than any other stadium in any other country. Both the semi-finals and final will take place in London, as well as three group games and a last-16 match.

With a total of seven matches taking place at Wembley it could well rekindle the spirit of Euro 1996. That was the last tournament England hosted and the whole country got swept up in football fever as the Three Lions progressed to the semi-final, where they suffered penalty heartache against Germany when current England boss Gareth Southgate had his spot-kick saved.

That tournament may not have ended the way England fans would have hoped, but the atmosphere around the country is still fondly remembered and plenty of 'home' Euro 2020 games should make for an exciting time to be in and around London next summer.

Have a chat with your mates about who you think will win Euro 2020 and it's a fair bet there will be a few different answers.

With 12 different hosts and without a dominant-looking team in qualifying, next year's tournament promises to be one of the most open and unpredictable yet.

France are the favourites with the bookies after winning the World Cup last year and although they qualified for the tournament by finishing top of their group, they were occasionally unconvincing along the way - losing to Turkey and scraping a 1-0 win in Iceland courtesy of a second-half Olivier Giroud penalty.

They, unlike several of their rivals, also do not have any fixtures on home soil at the tournament - although neither do Euro 2016 and Nations League winners Portugal.

England are second favourites and certainly possess an attack that will be the envy of many, while Belgium, Spain and Italy - who have turned things round dramatically since failing to qualify for last year's World Cup - all look strong after finishing comfortably top of their respective groups.

For almost half a decade the Netherlands national team was in the doldrums and football, you could argue, was poorer for it.

From their lively fans to their free-flowing football, the Dutch have always been welcome at international tournaments, but the 2014 World Cup semi-finalists had to watch from the sidelines during Euro 2016 and last year's World Cup after failing to qualify for both.

Now, however, they are back with a bang.

They qualified with a game to spare for Euro 2020 and are a side that look both defensively strong and exciting in attack.

There will be few better partnerships in the centre of defence at Euro 2020 than Virgil van Dijk and Matthijs de Ligt while the former, along with Frenkie de Jong and Donny van de Beek, are part of a new and exciting generation in Dutch football.

Add to that the experience of Memphis Depay, Quincy Promes, and Georginio Wijnaldum - who are all in excellent form for club and country - and the Dutch seem sure to be one of the most entertaining teams to watch at Euro 2020.

England in fine form and Wales back once again

It was a case of so near yet so far for England at the World Cup last year as hopes of ending a 52-year wait for a major trophy were ended with a semi-final defeat by Croatia.

However, the Three Lions' hugely impressive qualifying campaign, coupled with the blooding of some exciting youngsters, means there is reason to be optimistic of a strong showing at Euro 2020.

England were one of the highest-scoring teams at the tournament with 37 goals in 10 games. Harry Kane accounted for 12 of those as he finished top scorer.

And Wales are back on the big stage once again after securing qualification for a second successive European Championship.

At Euro 2016 - their first appearance at a European Championship - they enjoyed a fairytale run to the semi-finals and they will be hoping to at least replicate that next year.

Ronaldo will be a man on a mission

Former Iran striker Ali Daei holds the record for the most goals in men's international football with 109 - but there is a very realistic possibility Cristiano Ronaldo could surpass that tally at Euro 2020.

The Juventus forward took his international tally to 99 goals with Portugal's second in a 2-0 win against Luxembourg that also secured qualification.

If he maintains that rate he would need 11 games to surpass Daei's record but, given he has scored four goals in his past two games, if he keeps up that recent form he would take fewer games to reach his target.

With friendlies to come between now and next summer plus a potential seven games at Euro 2020 should Portugal get to the final, there is a chance Ronaldo will make history at the tournament.