Manchester United are favourites in the race to sign Red Bull Salzburg's Norway striker Erling Braut Haaland, 19, who was coached by Ole Gunnar Solskjaer at Molde. (Dagbladet - in Norwegian)

United hope to reach an agreement with Juventus for former Croatia striker Mario Mandžukić, 33, to train with the club next month before a January transfer. (Tuttosport - in Italian)

Mandžukić is also on the radar of multiple Major League Soccer clubs. (Calciomercato)

One of Tottenham manager Mauricio Pochettino's issues at the club is the failure to sign Brazil playmaker Philippe Coutinho from Barcelona in the summer. The 27-year-old ended up joining Bayern Munich on loan. (Sun)

Atletico Madrid are lining up a £35m January move for Barcelona and Croatia midfielder Ivan Rakitić, 31. (Movistar, via Mail)

The agent of Arsenal's Spain defender Héctor Bellerín says his client, 24, is "seeing how the season goes" at Emirates Stadium after receiving transfer interest from Italy. (Sky Sport Italia via Football Italia)

Juventus could make out-of-favour Germany midfielder Emre Can, 25, a reported target for Manchester United, available for a cut-price fee in January. (Calciomercato - in Italian)

Napoli stand to lose Albania international Elseid Hysaj, 25, for nothing when his contract expires next June, but they could have received £43m for the right-back from Chelsea last summer, says his agent Mario Giuffredi. (Radio Punto Nuovo via Mail)

League One side Peterborough have placed a £13m asking price on English striker Ivan Toney, 23, who has been linked with Burnley and Bournemouth. (Sun)

Frank Lampard will make another attempt to add Shay Given to his Chelsea coaching staff amid concerns about Spain goalkeeper Kepa Arrizabalaga, 25. (Mail)

The 114 Manchester City fans that travelled to Kharkiv for the Champions League game with Shakhtar Donetsk this season have been rewarded with a personal letter from Pep Guardiola and hospitality tickets for the return fixture. (Manchester Evening News)

Manchester United are hoping to have France midfielder Paul Pogba, 26, back from injury for the derby with Manchester City on 7 December. (Sun)

Former Chelsea striker Diego Costa is facing three months on the sidelines for Atletico Madrid, but Los Rojiblancos are not planning to recruit in January, despite the 31-year-old Spain international's expected absence. (Marca)

Another former Chelsea striker, Didier Drogba, 41, says he was offered a "perfect" coaching role at the club but rejected a return to Stamford Bridge so he could bid to become the next president of the Ivorian FA. (Metro)

BT Sport has retained the rights to show Champions League football for another three seasons from 2021. (Telegraph) 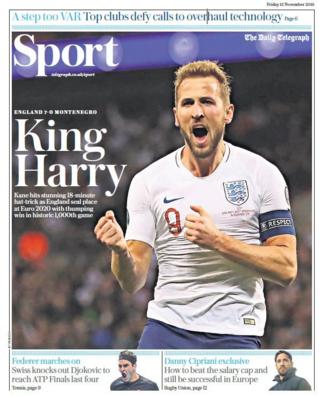 In the Daily Telegraph, "King Harry"