Tottenham Hotspur's England left-back Danny Rose, 29, has vowed to run down the final 18 months of his contract after being told by the club that he will not be given a new deal. (London Evening Standard)

Spurs fear 27-year-old Denmark midfielder Christian Eriksen, and Belgian defenders Jan Vertonghen, 32 and Toby Alderweireld, 30, will follow the same course of action as Rose and leave on free transfers at the end of their deals next summer. (Star)

Manchester City boss Pep Guardiola is thought to be unhappy in the north-west of England and the Spaniard is being linked with a return to Bundesliga champions Bayern Munich. (Bild - in German)

The forgotten England footballer who acted with Charlie Chaplin

The remarkable life of Fred Spiksley...

Chelsea's Brazil winger Willian, whose contract at Stamford Bridge is due to expire next summer, is a target for Juventus and Barcelona, and they could try to sign the 31-year-old on a pre-contract deal in January. (Mirror)

Netherlands boss Ronald Koeman says there is a possibility of him taking the Barcelona job after Euro 2020. (Marca)

Manchester City's David Silva, 33, is in line to join 35-year-old fellow Spanish midfielder Andrés Iniesta at Japanese club Vissel Kobe once his contract at Etihad Stadium expires at the end of the Premier League season. (Mail)

Bayern look set to return with a fresh bid for Sané after a serious knee injury prevented them moving for the 23-year-old in the summer. (Mail)

Napoli could be forced to sell 28-year-old Senegal defender Kalidou Koulibaly, who has been linked with Manchester United, and 32-year-old Belgium forward Dries Mertens, who is thought to be a target for Arsenal, for cut-price fees after a poor start to the season. (Ilmattino - in Italian)

Manchester United have a buy-back clause to re-sign Memphis Depay, with Lyon contractually obliged to inform them of any offer received for the 25-year-old Netherlands forward. (Mirror)

Manchester City - in the wake of their 3-1 defeat by Liverpool - are the latest club to write to referees' boss Mike Riley over concerns about the VAR system. (Times - subscription required) 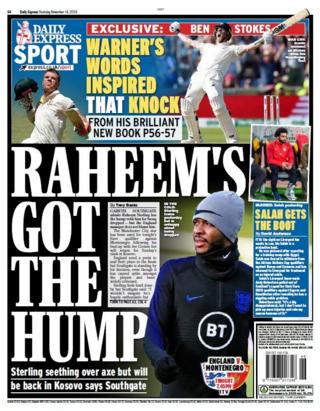