Wales boss Jayne Ludlow is not ready to concede that her side are playing for second in Euro 2021 qualifying.

A stalemate in Northern Ireland, combined with a draw with Kenny Shiels' side in Newport, means Wales have ground to make up on group favourites Norway with four games remaining.

Ludlow thinks Wales should be grateful their fate is in their own hands.

"We won't concede, definitely not, we are looking forward to the Norway games," she told BBC Sport Wales.

Group C certainly seems to favour Norway with Wales and Northern Ireland now at the halfway point in the campaign.

Fourth-placed Northern Ireland trail Wales by six points, but have a far easier run-in with double-headers against Belarus and the Faroe Islands.

Conversely, Wales still have to play Norway - who beat Northern Ireland 6-0 home and away - twice.

However, rather than looking over her shoulder, Ludlow insists Wales are still positive about their prospects of reaching a first major finals.

The runners-up in Group C are guaranteed at least a play-off berth and Ludlow is still hoping that the team in that slot could be World Cup quarter-finalists Norway.

"We have two Norway games. We look forward to the challenge come April and further into the New Year," Ludlow added. 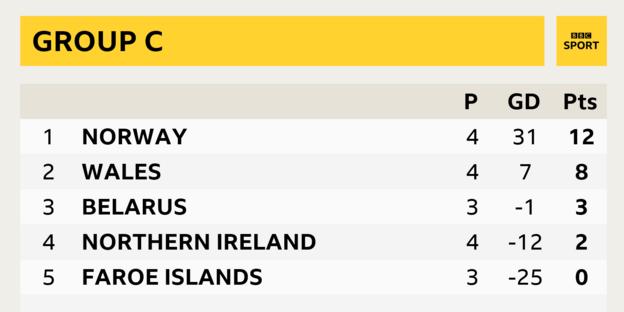 "We look forward to those games so we would not concede that (Wales are playing for second) not from our perspective, no."

Ludlow was pleased with the performance of her side at Seaview in a contest Wales dominated in terms of possession and chances created.

Rachel Rowe and Angharad James both missed gilt-edged chances as Wales were also left to rue a couple of penalty appeals for handball that were waved away.

"It was a great game of football for 90 minutes, it was the most interesting 0-0 draw I think I have ever been a part of," Ludlow said.

"We created numerous chances and hopefully on another night we will take them.

"There are lots of positives. We defended really well, kept a clean sheet away from home and four games in we are unbeaten and we are pleased.

"We competed well, we dug-in at times but we also played some great football."

Ludlow felt the 0-0 draw in Belfast was Wales' best 90 minutes of the campaign so far.

"We look at that performance and say 'we are progressing.' The result might not say that right now, but the level of performance was much better than we have produced in the last few months," she explained.

"The positive is we are creating the chances. I am really proud of them and it has been a really good campaign so far."