Former Arsenal, Chelsea and England midfielder Karen Carney, who retired after helping the Lionesses reach the World Cup semi-finals this summer, is writing columns for the BBC Sport website, working on Radio 5 Live and featuring on BBC TV this season.

I think Mesut Ozil will stay at Arsenal longer than Unai Emery.

Both of their contracts end in the summer of 2021 but it is the manager who is struggling most. And why Ozil hasn't been playing against teams who play a low block (sit deep) is baffling, especially with the money he is on - he's the highest-paid player in the club's history on about £350,000 a week and has made just three Premier League starts this season. He is wasted on the bench.

And regardless of what he earns, Ozil has proven he can be one of Arsenal's most important players.

Former boss Arsene Wenger seemed to get the best out of him. You saw that in what Ozil contributed, especially in 2016-17 when he was involved in 25 goals in all competitions as an attacking midfielder. Wenger believed in him and seemed to trust him. You don't get that vibe with Emery. For whatever reason, he just doesn't seem to like him.

Emery's doctrine seems to be 'if you train well and play well, you will get minutes'. That might be a factor in Ozil's lack of game time and Emery does have to stick to his principles as a coach. I'm not saying Ozil holds back in training, but some players are special and they appear to go through the motions during the week, rock up at the weekend and pull it out of the bag.

He has been around long enough, making 236 appearances for the club, so he knows what he needs to do.

What Ozil has that others don't

I don't think Ozil has been used in the right manner at Arsenal.

He can be Marmite - a super, super talent who can frustrate you at times. Arsenal fans know that and they know his vulnerabilities. He's not a player that will appear to put his body on the line, but people underestimate the work rate and confidence to always want to be in possession of the ball.

Because of how fast the game moves, standing still and using game intelligence can sometimes be mistaken for laziness. He is a special player that is needed in certain games and certain situations.

Most importantly, he has got end product. A lot of players get into good positions but they lack end product. Ozil's strength is that he knows where the players are going to be, knows where to put the ball and he has got that calmness when everyone else is running around frantically.

He looks like he plays the game in slow motion but he isn't. He just makes things look very easy.

Why Arsenal need to adapt

If Ozil does come back into the side, something will have to change. Nobody is disciplined enough at Arsenal to do the defensive work to allow Ozil to express himself.

The problem with Arsenal's midfield is that they all want to go and they all want to attack. That has been the Arsenal way and it's their Achilles heel. Ozil needs two people sitting in - players who are going to do the hard graft and the dirty work.

Emery has a good attacking line-up, but the rest is not there. The front four should be allowed to do their bit and everyone else defends and plays it simple. The players need to be reliable, consistent and have more structure. The attackers need to be free - and that includes Ozil. Don't put any reins on him.

You have to accept that as a manager, or you don't play him in certain games. But it's strange he hasn't played in games where Arsenal have had a lot of the ball and you would expect him to have more impact. I don't know what the reasons are.

People like Ozil are being made to feel like scapegoats because the midfield all attack and leave the defence very vulnerable. They need to protect the back four, who aren't good enough at the moment.

It's down to the manager to discipline them and teach them how to do it. Paul Pogba is an example at Manchester United - he is so different playing for France because he has Chelsea's N'Golo Kante behind him.

Why Ozil's relationship with Emery is important 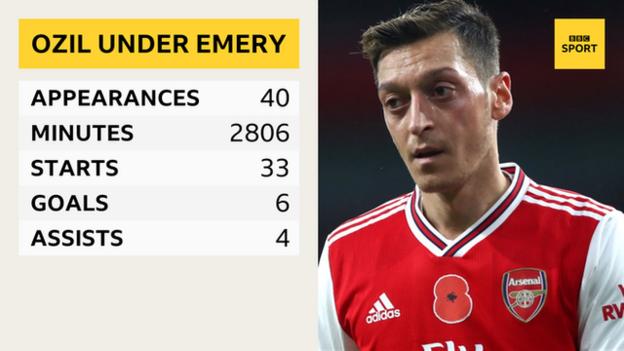 You want to be inspired by the manager and work hard for them every single day. You want them to get the best out of you. Nobody wants to work for somebody they don't get on with or don't believe in their philosophy.

That's why it's important you are at a club with a manager who is going in the same direction as you.

As a manager, you know what the players' strengths and weaknesses are. Ozil plays differently and I think that's why he gets a hard time - the others who are not doing their jobs don't.

Emery has given him a chance now and he needs to take it, otherwise people will say 'wow, now I see why they didn't play him'. It's down to Ozil now.