Scotland's bleak Euro 2020 qualifying campaign was brought to a close with a laboured victory over Kazakhstan in Glasgow.

With only third place at stake, Steve Clarke's men came from behind at a sparse Hampden against the world's 121st best side as a John McGinn brace and a Steven Naismith goal cancelled out Baktiyar Zainutdinov's fine strike.

Scotland now go into a play-off next March to try to reach the finals after winning their Nations League group, with the semi-final draw on Friday.

They will face either Bulgaria, Hungary, Israel or Romania in a one-legged tie at Hampden, with Norway or Serbia awaiting the winner.

Fewer than 20,000 fans were at Hampden to witness what was only Scotland's fifth victory of the group and which saw them finish the campaign nine points adrift of second-placed Russia.

The icy temperature was reason enough for the Scotland fans to stay away, but the truth behind the paltry attendance at Hampden had a whole lot more to do with apathy than anything else. Clarke was looking for a third win in a row at the end of a calamitous campaign and a modicum of feel-good factor before March's play-offs, but he's operating in a football vacuum nowadays.

The damage was done long before he fetched up in the job and there's a dwindling number of people prepared to turn up to watch. Even the lure of free tickets wasn't enough to bring out a reasonable crowd. If bigger numbers were watching they were doing so from home or the pub.

How many were still watching beyond the break is anybody's guess. Scotland were losing at that point. They were booed off into the bargain. Their lack of urgency was the thing. Or one of the things. There was no intensity, no tempo, not a hint that suggested they really wanted to win.

A laziness pockmarked their performance. Too many players strolled about, as if their mere presence would be enough to make the visitors fall in a heap at their feet, as if hard work wasn't required to get the job done.

Aleksey Schetkin gave Scotland an early scare when he almost got on the end of a ball into the box, and a touch might have brought the opening goal. McGinn and James Forrest had half-chances soon after but it was dull and Hampden was silent - and freezing.

Then it was a little noisier, but not in acclamation of a Scotland goal. The volume was turned in anger at one for Kazakhstan. Liam Palmer gave it away, then Scott McKenna stood off Zainutdinov and he accepted McKenna's invitation to shoot by curling a beauty beyond David Marshall.

Having thumped Scotland 3-0 earlier in the campaign they were now piling on the misery all over again. Kazakhstan, it has to be remembered, are ranked 121st in the world. More humiliation beckoned.

When Ryan Jack wasted a decent chance when blasting straight at Dymtro Nepogodov in the Kazakhstan goal just before the break, the mood at Hampden was grim. The only sign of life out there was the sound of booing. 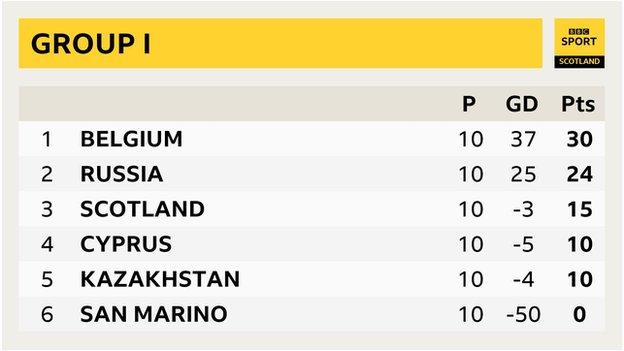 If Clarke took a verbal flamethrower to his players at half-time, they warranted it. This team is long past mere hairdryer treatment. Whatever words he came up with had an impact. The Scotland that appeared for the second half had more about them than the passive plodders who played out the first 45 minutes.

They needed luck and they got it. McGinn's free-kick 20 yards out took a huge deflection off Sergei Maliy and flew past Nepogodov. It was the Aston Villa midfielder's sixth goal of the campaign following on from the ones he got against Cyprus, the hat-trick against San Marino and the opener against Russia.

Scotland moved the ball faster and played with a bit of hunger. At last. Forrest fired over the top when he might have scored, Naismith did the same and he should have scored, too. The Hearts man then had a close-range flick just wide after some undue enterprising play.

They went ahead just after the hour when Palmer, emerging from a really poor first half, asked some questions down the right. His cross deflected into the Hampden sky and here again Scotland were fortunate. McGinn, who showed significant leadership in that second half, barged into Nepogodov at the near post but got away with it. As the ball descended, Naismith jumped highest and managed to bundle it home.

There was a third at the end and a second for McGinn, a goalscoring godsend. John Fleck played it to Greg Taylor, who squared for the Villa man who got in ahead of his markers to poke it home. That's seven goals in a relative blink of an eye for McGinn. A real bright spot.

Scotland saved themselves. For Clarke, a manager utterly desperate for momentum, it was a third win in a row. Better, for sure. Not enough to draw a half-decent crowd to the national stadium, but he'll feel there is some positivity before the great play-off denouement in March.

McGinn has become a huge figure in this team, but the manager needs more with his kind of desire. 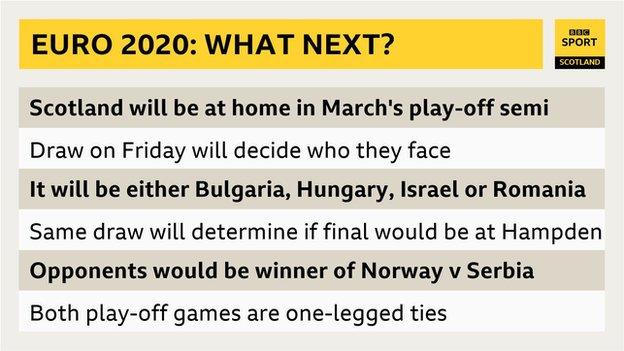