Manchester United are lining up a summer move to sign Crystal Palace forward Wilfried Zaha, 26, for the second time and are willing to pay £70m for the Ivorian, who was with them between 2013 and 2015. (Sun)

Liverpool are in advanced talks to sign Scotland winger Ryan Fraser, 25, from Bournemouth in January. (Talksport)

Tottenham are ready to make a £50m bid for 25-year-old Lyon midfielder Memphis Depay, who played for Manchester United between 2015 and 2017. (Mirror)

Manchester City are reportedly set for a £100m spending spree in the January transfer window after failing to keep pace with Liverpool in the Premier League title race. (Mirror)

City manager Pep Guardiola is also expected to see out the final 18 months of his contract with the club. (Times)

Manchester United will not be trying to sign their former striker Zlatan Ibrahimovic, 38, in the January transfer window. Ibrahimovic is available on a free transfer when his LA Galaxy contract ends. (Sky Sports)

Emery warned by Arsenal board

Arsenal manager given public backing but 'things need to improve'

Arsenal manager Unai Emery will be given the next six games to prove he is still the man for the job at Emirates Stadium. (Standard)

Former Spain boss Luis Enrique, who has been tipped as a potential replacement for Emery at the Gunners, is not considering a return to management at the moment. (ESPN)

Newcastle midfielder Matty Longstaff, 19, will sign a new contract in the next few weeks but his 22-year-old brother Sean has been told he has to do more over the next 12 months to earn a new deal. (Telegraph)

Spanish forward Ayoze Perez, 26, has revealed he turned down a move to Valencia in favour of joining Leicester from Newcastle in the summer. (Mail)

Tottenham, Chelsea, Watford and Norwich are ready to make a bid for Metz striker Habib Diallo in January. The 24-year-old Senegal international has scored eight goals in 13 appearances so far this season. (Teamtalk)

West Ham are considering buying a new goalkeeper in January after becoming increasingly concerned with the form of Roberto. The 33-year-old Spaniard has conceded 13 goals in six Premier League games since coming into the side for the injured Lukasz Fabianski. (The Athletic - subscription required)

Hammers boss Manuel Pellegrini is also working to repair a minor dressing-room division over his side's defence after their defeat at Burnley. (Sun) 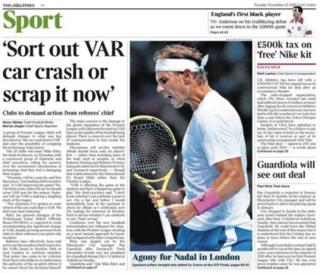 The back page of the Times