On 10 November 2009, the Germany squad were in their hotel restaurant preparing for a home friendly match against Chile. Assistant coach Oliver Bierhoff stood up to tell them some news.

Bierhoff had just told the players that Robert Enke, the goalkeeper on course to be Germany's number one at the 2010 World Cup, had been hit by a train at a level crossing near his home. A note to his wife was found in which he wrote of his intention to take his own life.

For Mertesacker, the grief for his friend and the shock at what had happened made him consider if he could even carry on as a professional. He had never seen Enke suffering. "I'd never seen him being the one who's got issues."

But Enke's family knew about the depression that had affected him throughout his career.

Ten years on from Enke's death, those who were closest to the goalkeeper came together to remember him at a theatre hall in Hannover, where his widow Teresa joined in a standing ovation for 'Robbie'.

"It was a great tribute and very emotional, but for me it was also very difficult," she says. "I did not know what I should say.

"I felt good but it was also very deep and also a bit a painful. Overall the event was wonderful and worthwhile."

Robert Enke played for some of Europe's biggest clubs. At Borussia Mönchengladbach and Portuguese side Benfica he forged a reputation that persuaded Louis van Gaal's Barcelona to sign him in 2002. After a difficult spell with the La Liga giants, he eventually settled at Hannover 96, where he became one of the most commanding goalkeepers in German football.

But Enke's career had been affected by depression even before the death in 2006 of his two-year-old daughter Lara, who had been born with a severe heart defect. He was first diagnosed with depression in 2002, after falling out of favour at Barcelona and with his career stalling during loan spells in Turkey and the Spanish second tier.

In May 2009, Robert and Teresa adopted a two-month-old daughter, Leila. They brought her home to their converted farm house in the village of Empede, Lower Saxony, where the couple also kept nine dogs and two cats they had rescued from the streets.

They took breaks in Portugal, where Robert had enjoyed one of the happiest spells of his career, and they owned a holiday home just outside Lisbon.

His career was firmly back on track with Hannover, and many pundits in Germany were urging him to leave the mid-table Bundesliga club to further his international prospects. Bayern Munich had reportedly shown interest.

But in 2008 and again in 2009 the depression returned. Enke was receiving therapy, but was never admitted to an institute for psychiatric care. He feared that to do so would mean the end of his football career.

In November 2009, with opportunities opening up for Enke on the international stage, and with growing interest once again from clubs across Europe, he took his own life at the age of 32.

"He had three bouts of depression in his life and the last one unfortunately killed him," Teresa says.

"Before that he was a humorous, kind, funny man. He was a wonderful husband, a great father."

Enke's final match was a 2-2 draw between Hannover and Hamburg on 8 November 2009. It was just two days before his death.

He had spent some time away from first-team football earlier in the season, but now he was back. And even if it was an unremarkable performance, it felt like progress, as Robert's agent, Jörg Neblung, remembers.

"As you can imagine it was a really difficult situation, but we had the impression that he was getting better more and more the days before," he says.

"It was not the best game for him, but that wasn't important, he was on the pitch for 90 minutes, he came back in the VIP area after the game, we were glad at that point.

"We took him home, for all of us we were under the impression that he was getting better, that this was the turnaround. But one week later we knew this was not the truth.

"When people decide they are going to die in the next days, they are more open, they can look you in the eyes suddenly. We thought, 'OK, he's getting healthy again, this is the turnaround'.

"But really he knew that, in the coming days, that will be the end of the pain."

For Teresa, too, the images of that final match are hard to look back on.

"There's one moment in his last game which I find very difficult," she says.

"It looks like he's saying goodbye and looking up to heaven. For me this picture is very painful."

On the Monday that followed the match Robert left home in the morning. He told his wife he had to attend a Hannover training session.

When he still hadn't come back home later that evening, Teresa called the side's goalkeeper coach. He told her the players had not trained that day, and her husband was not there.

Neblung heard the news from Teresa, and tried to stay calm on the phone.

"I said OK, let's take a look at his bedroom, take a look try to find something, any notices, is there something written," he says.

"She found his letter, so then I immediately called the emergency line. When I told them the name of the person, 'Robert Enke', there were two seconds of silence where they realised we were talking about the national team goalkeeper of Germany."

At 6:15pm that day, at a train crossing in Eilvese, not far from Enke's home, the Hannover goalkeeper was hit by the regional express service travelling between Hamburg and Bremen. His car was found near the scene, unlocked, with his wallet on the seat.

The two train drivers reported seeing a man on the tracks and applying the brakes. They were travelling at 100 mph and could not stop in time.

The next day, as fans gathered outside Hannover's stadium to lay flowers and light candles, Neblung called a news conference, where he told the football world that Enke had chosen to die by suicide.

Neblung says: "It's still unbelievable for me that at a moment when he could choose where he wanted to go - stay in Hannover, go to a top club, playing for Germany as number one at an international tournament - that at this time even then the depression would come back and hit us with unbelievable power. It's difficult to deal with."

While Germany's squad processed what had happened together, many of Robert's team-mates at Hannover were scattered around the world on international duty and would hear the news alone.

Karim Haggui had joined Hannover the previous summer. To him, Robert was the image of the club, and a key line of communication in his role as a central defender. He was preparing for his Tunisia side's World Cup qualifier when he took a call in his hotel room from Germany.

"It was a horrible moment, and even more difficult because I wasn't there," Haggui, 35, says 10 years on.

"I took the call on my first day away with the national team, and now had one week away from Hannover. It was hard because Robert's name and his image kept coming back to me. It was very difficult."

Haggui played a full 90 minutes in his Tunisia side's match just three days later, where an unexpected 1-0 defeat away to Mozambique cost them a place at the 2010 World Cup.

But it was Hannover's return to domestic football a week later, an away match in the Bundesliga against Schalke, that stands out in his memory.

"We played the game, but there was no real motivation for us," he says.

"When you have something like this in your life, with your captain, football was the last thing I wanted to do. It wasn't important.

"We went on the pitch, we got through the 90 minutes, and then we went home. We lost that match 2-0, but this game I will never forget. The Schalke team, all the fans, the whole stadium, I got a special feeling, the feeling that all the people were telling you they are with Hannover for this game, this time."

Hannover paid tribute to their goalkeeper in the home match that followed against Bayern Munich, but for Ronald Reng, a journalist who had followed Robert's career, it also felt like football didn't matter anymore.

"I wasn't interested in football after Robert's death," he says.

"What I do remember is that, weeks afterwards, there was still a note in his handwriting on Robert's kitchen wall reminding himself to order four tickets for the Bayern game for his friends."

Reng would later document Enke's story in his 2010 book A Life Too Short. It would reveal to an audience in Germany and around the world how an international goalkeeper suffered with depression throughout his entire playing career.

"It feels like a task Robert has given me. We need to create better requirements to fight the disease which killed him. That's his legacy," he says.

"Something, at least one good thing, has to come out of his death. At times it is hard to talk about it again and again, but then I picture Robert in my mind and he gives me the power to go on."

For Neblung, too, taking on Robert's legacy means trying to change the way footballers approach mental health, and trying to change the perception of players as sporting super-humans. He points to England defender Danny Rose's public admission about experiencing depression as an example of how professionals can find a way back.

"It's amazing that he [Danny Rose] was so strong to open himself and to come back again, and everyone should learn, this is the way it should go.

"Get help, get serious help, be strong and open. To yourself, to your family, to the officials at your club. They are able to help you.

"If you met Robbie, you understood what kind of a special person he was. That's what everyone is remembering still."

Teresa has less affinity with football now than she did a decade ago, but in setting up the Robert Enke Foundation she has seen a growth in understanding - in football and in society at large - that has made it easier for players to open up about depression. If that was an option for her husband, she thinks it might have saved him.

"I think he would have had a chance to survive if he had taken that step. But it was a different time, it was 10 years ago, and I can understand that he didn't have the confidence to do that," she says.

"It should be allowed by the coaches and players in the dressing room to show your emotions, and to say 'I'm not feeling good' without immediately having to worry about your place in the team.

"It's an amazing sport. It's hard to change, and will never change, because there's simply too much money, too much emotion and too much put onto the game. It's like this because people want sport like this."

She prefers to remember Enke on her husband's birthday in August rather than the day he died. But the 10-year anniversary of his death was also a time for her and Leila to look back.

"Our family and friends are coming together and we will think of Robbie. We will tell nice stories about him.

"But we will all look to the future and imagine Robbie's smile."

If you or someone you know has been affected by a mental health issue, help and support is available at bbc.co.uk/actionline 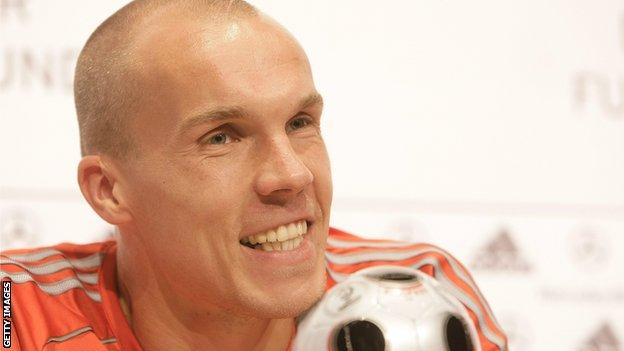