Brazilian midfielder Taison says he was crying "tears of helplessness" after being sent off for reacting to alleged racist abuse during Shakhtar Donetsk's 1-0 home win against Dynamo Kyiv.

Taison, 31, made a gesture towards the Dynamo fans and kicked the ball at them before the referee took the players off the pitch and dismissed Taison.

Brazil team-mate Neymar is among those to have sent him messages of support.

Taison said: "I will never shut up in such an inhuman and despicable act."

In a post on Instagram, he added: "My tears were of indignation, repudiation and helplessness, helplessness that I could do nothing at that moment!

"But we are taught early on to be strong and to fight! Fight for our rights and for equality!"

Paris St-Germain forward Neymar, Manchester City midfielder Fernandinho, Juventus winger Douglas Costa and Everton forward Bernard are among those to have responded in support of Taison.

Bernard, who used to play for Shakhtar, said: "Unfortunately, this is a very backward country when it comes to this, brother, but head on, never stop fighting and doing what you know very well, which is playing soccer. I love you."

Shakhtar said both Taison and fellow Brazilian Dentinho were targeted and the Dynamo fans were warned twice.

The referee took the players off the pitch in the 77th minute, after Taison made an offensive gesture and kicked the ball into the crowd.

When they returned five minutes later, referee Mykola Balakinwas adjudged that Taison's reaction was worthy of a red card. Video on social media shows both he and Dentinho in tears.

"My role is to fight, to beat my chest, to lift my head and keep fighting always," added Taison. 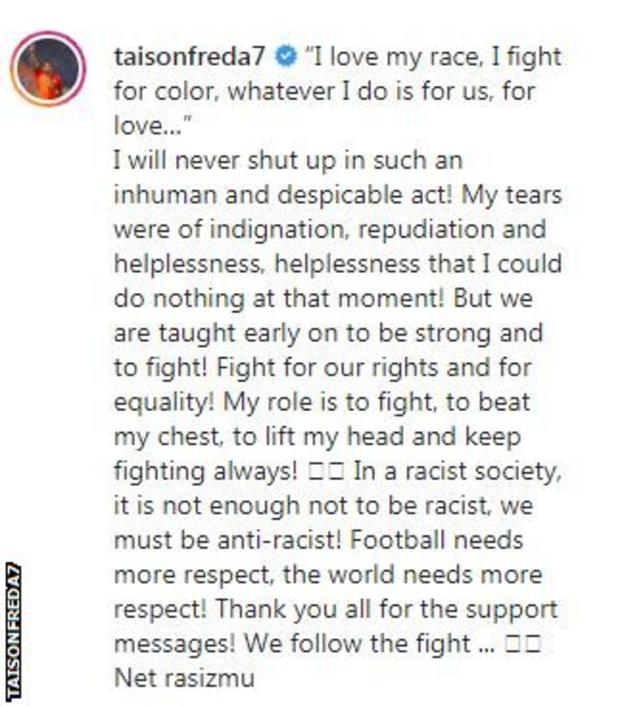 In a statement after the game, Dynamo said they would cooperate with any investigation into the incident.

In a club statement, Shakhtar said they "categorically oppose any manifestations and forms of racism, racial discrimination, xenophobia, and any related intolerance".

The club said it will "always voice the support and protect our players" and calls on "football authorities and clubs to stop racism in the stadiums".

In a tweet after the game, Dynamo wrote "#NoToRacism".

"We consider hasty the allegation of a predetermined guilt of the fans, when the investigation into the circumstances of this case has not yet begun," Dynamo said.

"We look forward to the start of the investigation, ready to assist it comprehensively and, if proven guilty, will take all possible steps to further isolate these individuals not only from football but also from society.

"We look forward to the release of photos and videos that could shed light on all the circumstances of the incident."