Arsenal boss Unai Emery called for calm after Saturday's 2-0 loss at Leicester and said the Gunners have time to turn their season around.

The defeat leaves them eight points adrift of the Champions League places, with the Foxes moving up to second in the Premier League.

Brendan Rodgers' side are nine points ahead of Arsenal, who are sixth and without a league win since 6 October.

"We have time to achieve and recover that distance," said Emery.

"We had chances, we had our moment. They scored the goals and they won. We are now in the table with distance from them but we have time.

"We must stay calm and improve."

The pressure has been mounting on Emery following a disappointing start to the season in which they have been inconsistent on the pitch and have also had to contend with issues off it.

The future of Mesut Özil is unclear with the midfielder, who started against Leicester, finding himself in and out of the side, while Granit Xhaka has been the centre of attention in the last week following his angry reaction to being substituted in last weekend's draw with Wolves.

Xhaka subsequently lost the club's captaincy and was not included in the squad against Leicester.

Despite the defeat Emery, who employed a five-man defence for the first time this season, was happy with how his players performed on the whole.

"We can be disappointed with the result but the players did the gameplan that we prepared," he added.

"They scored the first goal and in that moment we lost the possibility to do something in this match.

"But the attitude was good, the gameplan we prepared - the players did that." 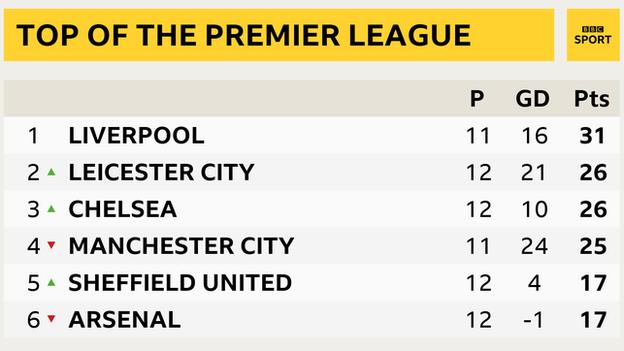