The stab victim, thought to be a 20-year-old man, was treated in hospital for a back wound before being released.

Several Celtic supporters were also attacked when a shuttle bus transporting them from the stadium broke down and was ambushed.

Police arrested 12 people known to be members of the Lazio Ultras group in connection with the bus attack.

Fireworks, bottles and other objects were thrown after the Europa League game, which Celtic won 2-1.

It is understood those arrested belong to the most extreme element of the Lazio support.

It is not thought that any Celtic fans sustained serious injuries after their bus was ambushed.

In the lead up to the game, two Celtic fans were stabbed by masked men outside the Flann O'Brien pub in the city. 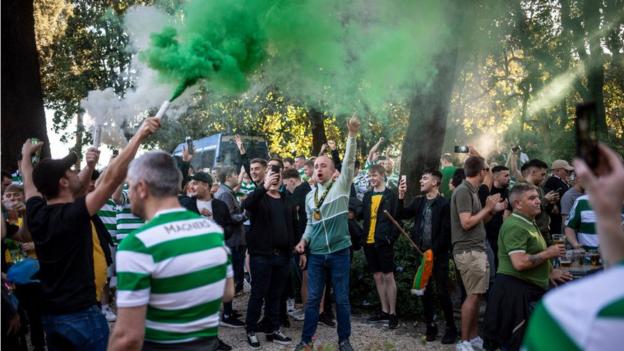 Both were stabbed in the leg but their injuries are not life-threatening.

One of the men, aged 52, is still in hospital but the other has been released. Police said an investigation was ongoing.

Tensions were high after warnings that Lazio fans wanted revenge for a controversial banner unfurled by Celtic fans at a match in Glasgow last month.